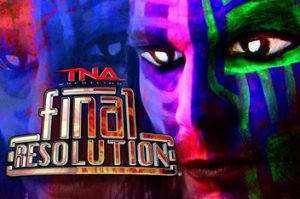 Final Resolution was the last TNA Pay-Per-View of 2012 and it was highly unspectacular.

There were no matches that left us speechless, nothing that made the internet orgasm, just slightly below average.

END_OF_DOCUMENT_TOKEN_TO_BE_REPLACED

– Marcus Malone’s an up-and-comer with potential, but he has been so watered down because of his constant losses that whenever he does get a Title shot, we’re never convinced he’ll win. That kind of thought isn’t the best to open with, but that’s what we had this week as Malone had a chance to win the WCWC Pacific Northwest Championship from Champion Grappler III (who has battled an identity crisis to become the “Only Grappler,” which works from an old-school heel standpoint) and the match was pretty easy to think out. The match’s slow pace didn’t help matters as G3 dominated early, but the in-ring story never went anywhere even despite Malone’s late comeback. We did like the “karma” in how G3 originally used a foreign object in his mask to headbutt Malone out cold to win only for WCWC Legacy Champion Eric Right to come out and protest the decision, getting physically involved to loosen the object from G3’s mask to have the decision reversed to Malone. It was seen as “justice,” but Malone did nothing more than get maybe another Title shot. Right looked the best coming out from this.

END_OF_DOCUMENT_TOKEN_TO_BE_REPLACED

– Even though he seems to be who West Coast Wrestling Connection lugs out for anybody’s debut matchup, it says a lot about how great Ethan HD continues to look in the process. This episode’s marquee factor was in Wes Brisco’s WCWC debut (who already had a lot of work to do to shake off the “Aces And Eights” TNA stink) and that was handled nicely. These two meshed well in the ring and like you’d expect Kate Carney to, she was a factor early on. Ethan had new, slower theme music, which took us by surprise. Brisco’s covered in tattoos from the torso down, which could be distracting given his ring attire, but it also made him stand out in a good way. We never doubted the result, even if Ethan had one good near-fall. The clear story was Brisco’s big comeback to overcome Carney and beat Ethan on his first night. The Brisco Bomb also came off well as a go-to finisher.