It seems as if the internet may have bursted at the conclusion of last night’s World Title match.

CM Punk picked up the scraps, retained his Title and today marks the one-year point of his reign.

Rollins, Ambrose and Reigns are all familiar to NXT viewers and how WWE will have them explain their actions should make for good television.

It’s fortunate that there was this to boil over from because besides for a few shiny spots, this was a mostly forgettable show.

END_OF_DOCUMENT_TOKEN_TO_BE_REPLACED

Every Rose Has Its Thorn

Most of us have learned the hard way that too much partying can be bad.

Those of us familiar with NXT from 2012 to 2014 will fondly remember a deadly superstar named Leo Kruger. Many wins and some excellent feuds led the South African to become one of NXT’s brightest stars and a keen fan favorite.

In May 2014, WWE fans were overcome by a storm of flamboyancy when a repackaged and renamed Adam Rose debuted. The partying prophet racked up mid-card wins aplenty and put together an impressive streak that led people to believe that he was on the brink of breaking through to the scene of midcard championship contenders.

END_OF_DOCUMENT_TOKEN_TO_BE_REPLACED

Would you believe there was a time when they were resented by the WWE fans and had “go-away heat” as babyfaces?

It took some work to get from point A to point B but it has been done nevertheless and it’s time to celebrate the feat.

The feisty trio of Kofi Kingston, Big E and Xavier Woods came to fruition on Jul. 21, 2014, but they officially adopted the “New Day” moniker on Nov. 3 that year.

To that point, all three guys had some main roster success, the most notable of the three being Kingston, who wowed us with his energetic, high-flying athleticism from his WWE-ECW days right on to reigns with the Intercontinental Championship, WWE World Tag Team Championships and the WWE United States Championship.

A close second was Big E, who was already the second-ever NXT Champion and an established Intercontinental Champion since debuting as Dolph Ziggler’s bodyguard in a major storyline in 2012.

Woods was newest to the spotlight, but had a following from his TNA days and swept fans with his solid in-ring skills and emphasis on intelligence, part of what was used to spark the “idea” of him offering to form the stable with Big E/Kingston.

At the time, the three had no momentum separately and appeared to be destined as Main Event and Superstars material until an inevitable release, but once fans got to see the spark of New Day’s wave of positivity and sleek in-ring chemistry, they had some hope.

On paper, New Day was a great pairing. Kingston was the high-flyer, Big E the muscle and Woods the smart, versatile one. Their spots were cool and won fans over by the end of matches.

There was one problem though.

Somewhere along the way though in early 2015, New Day’s positive gospel-esque gimmick was shot down by fans and critics alike. An early sign was at Royal Rumble 2015 when all New Day members were booed during their entrances when a babyface reaction was expected. Nobody wanted to cheer three happy guys with no personalities. It didn’t feel real. It wasn’t believable.

Fans booed anything New Day-related and feared the team winning the Championships, even turning the team’s trademark rhythmic clap into a “New… Day Sucks!” chant that began to catch on for the wrong reasons.

This appeared to be another case of Vince McMahon stubbornly sticking to his ideological guns, but with the rising popularity of heel tag team Tyson Kidd/Cesaro came the perfect opportunity to pull off a double turn during their rivalry and it worked out when New Day won their first Tag Team Championships via Kingston pulling on the tights at Extreme Rules 2015.

New Day began to cheat in other people’s matches and adopted self-righteous attitudes, emphasizing their positivity in a condescending manner. The fans’ anger was finally embraced and the trio began to think outside of the box with entertaining promos that both busted guts and insulted fans all in one.

Woods began to trash-talk at ringside during their matches, shouting terms like “Tricep Meat!” and all hell broke loose when a trombone was brought into the act, going full comedic. It was a smart move and one needed in the worse way.

After all, when a babyface gimmick doesn’t work, give it the old heel turn and more than likely, you’re in for a success.

Everything’s going fine for the “unicorns” that are constantly involved in some of the best Raw/Smackdown matches and there’s no reason this has to stop anytime soon. Continue to showcase the excellent in-ring and mic skills of this young group and it gives you heels that can be used at any spot on the show.

Their one-year anniversary was celebrated recently on Raw with a “country music jamboree” that proved to be another in a continuing line of wonderful segments that also included a Thanksgiving “potluck dinner” on Smackdown where we saw a surprise appearance by The Gobbledy Gooker. Is it possible for these guys to have a bad match or segment? Quite simply, no.

What’ll the future hold for The New Day?

Let’s start by saying that more gold’s the answer. A possible new Intercontinental or United States Championship run by Kingston would allow Big E/Woods the opportunity to control the tag team division while Kingston feuds with the likes of Neville, Cesaro (upon his return), and Ziggler. Think of the greatness that’d come from that.

They’ve recently been featured in major storylines, aligning with the newly formed League Of Nations, but they should have even more of a presence at the top of the card.

Why can’t a clash with The Usos for the Tag Team Titles main event a Smackdown? You can even put that high up on the Raw card sometime in the third hour.

For the team to truly be taken seriously though down the road, because this group holds potential WWE World Heavyweight Champions, they must drop the comedic aspect of the gimmick. While that’s hard to write, because I honestly laugh uncontrollably every time Big E dances with a ridiculous facial expression and shouts “Booty,” the World Champion should be a confident, serious individual.

The laughter must go away one day. Trust me, it’ll be worth it.

For now though, it’s hard not to feel the power of positivity as I hold my finger to my forehead unicorn style while gyrating my hips whenever the group graces my television weekly.

You fellow readers should join me in recognition of a positive influence on wrestling that’ll hopefully entertain us for years to come and be the true springboard for the careers of Kingston, Big E and Woods, who haven’t even touched their prime yet.

If beauty’s truly in the eye of the beholder, my eyes see much beauty in young Tyler Breeze’s career, even though said beauty can be destroyed by misinterpretation of those in charge.

In 2010, when WWE signed the 22 year-old Canadian superstar trained by Lance Storm, I assumed they didn’t see anything special seeing how there were several different ring name changes.

After vast soul searching, Tyler Breeze was born and WWE fans were introduced to a character that’d teach us the true power of a selfie stick.

While taking countless pictures along the way, Breeze showed us that he had a special set of wrestling skills. The man could fly around the ring while showcasing impressive technical skills. Feuds with top NXT talent like Neville, Sami Zayn, Tyson Kidd, Hideo Itami and current NXT Champion Finn Balor helped solidify Prince Pretty’s reputation as one of NXT’s most well-rounded.

END_OF_DOCUMENT_TOKEN_TO_BE_REPLACED

Cesaro – The Real “Money In The Bank”

The six-foot-five, 232-pound Cesaro debuted on WWE television in April 2012. For those of us who knew of him in his time in the indies with companies like Ring Of Honor. Chikara Pro and Combat Zone Wrestling, we knew we were getting an exciting main event-level superstar.

When he successfully won the United States Championship that August from Santino Marella, we rejoiced in a fairly talented newcomer holding a then-dying Championship.

After having the belt for an impressive 239 days, Cesaro lost it to Kofi Kingston and once that happened, everything seemed to slow down.

END_OF_DOCUMENT_TOKEN_TO_BE_REPLACED 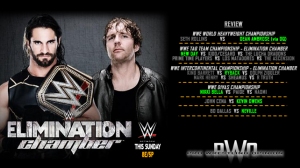 END_OF_DOCUMENT_TOKEN_TO_BE_REPLACED

Give WWE credit where it’s due.

Coming out of the gates of Payback with another “Network-exclusive” PPV just two weeks later was a risk of talent overexposure, but quite frankly, WWE shelled out a card even better than its predecessor.

NXT Champion Kevin Owens marched into the main roster by laying out John Cena, stepping on his prestigious United States Championship in the process. Add that with his mic work that gets better by the segment and stand off with Samoa Joe, he’s damn near broken the Internet. If that didn’t, the announcement of him against Cena on this show probably did. The entire community will hold their collective breaths on this one, but it’s arguably the real seller of the card.

As for the rest of it, it’s what we’d consider above-average on paper, though nothing mind-blowing, and we’ll get to that slightly below.

END_OF_DOCUMENT_TOKEN_TO_BE_REPLACED

– As far as the opening segment, it made sense for Dean Ambrose to come out and rave about outsmarting The Authority once again. He also mentioned Roman Reigns being his only friend and brother, which could be a seed planted for a later feud. Also a bit risky to draw attention to Seth Rollins’ online mishaps, but it was handled okay in the context of the feud itself. Ambrose’s words were solid hype but it made us think maybe a segment of him in the jail cell on Raw would’ve helped his imagery.

END_OF_DOCUMENT_TOKEN_TO_BE_REPLACED

– After the classy-as-ever 10-bell salute, the show started off lukewarm at best in terms of the first segment with The Authority, Dean Ambrose and Roman Reigns. The main highlight here was the promo exchange between Ambrose and Rollins that was actually pretty strong enough on its own to make us want to see them go at Elimination Chamber. The tone of this episode though, was making us believe it wouldn’t happen at all. Triple H and Stephanie McMahon using last week’s deal as a “verbal agreement” was an obvious way to gain advantage this week, making it appear so hard to sign a piece of paper. Ambrose’s responses here were at least quirky and whimsical enough to get fans behind him, while Rollins’ comparison of Ambrose to a cockroach was fitting from his point of view. On that note, how could The Authority not see Ambrose calling for Reigns’ help? This at least set the opening tag match on a good note.

END_OF_DOCUMENT_TOKEN_TO_BE_REPLACED

– The opening video highlighted Dean Ambrose crashing Seth Rollins’ “Architect of a Dream” segment on Raw to get another shot at the WWE World Heavyweight Championship at Elimination Chamber with some cold cinder block Justice, though Rollins got the last laugh, delivering a much-smoother Pedigree.