Follow Nick on Twitter @NickJasonLopez as he Live-Tweets Raw and SmackDown Live! Below are just some of his thoughts on tonight’s show: 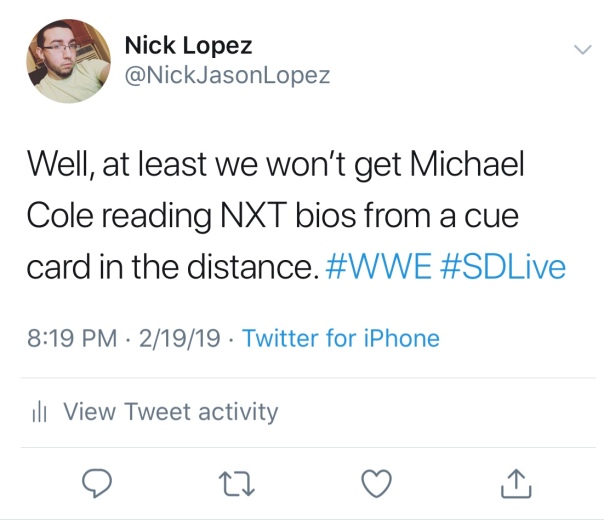 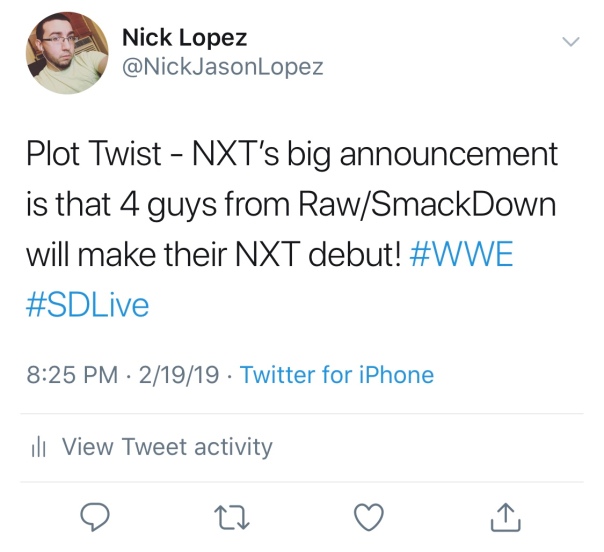 Check out the latest episode of Intermission where Nick talks about pro wrestling news for 15 minutes with help from his Facebook feed!

Check out the latest episode of The RSN Wrestling Podcast as Hosts Rich, Sal and Nick break down the cards and cast predictions for both this year’s Royal Rumble and NXT TakeOver: Phoenix! 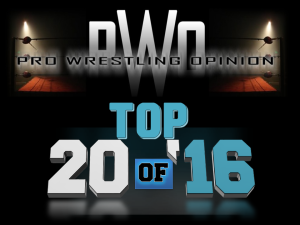 END_OF_DOCUMENT_TOKEN_TO_BE_REPLACED

The Glorious 10 Is Born

– It’s an incredible thing that the Dusty Rhodes Classic Tag Team Tournament was already back in its second edition. We began with a promo from NXT General Manager William Regal in an empty arena as he broke down the news that 16 teams would face off in single elimination rounds and it’d all start next week. Such a great way to enhance the TV episodes and is a smart move all around.

END_OF_DOCUMENT_TOKEN_TO_BE_REPLACED

“Notes In Observance” features random thought and analysis on recent television shows. Quick results can be found at the bottom of the post.

– The opening video took us back to last week when Samoa Joe swerved everybody as he played the “nice guy” to get NXT Champion Shinsuke Nakamura to agree to a rematch for the belt before he brutalized him without remorse with help from the steel steps. With some ample time before NXT’s next TakeOver special, this was a smart way to prolong things in a way that kept the focus on Joe’s aggression.

END_OF_DOCUMENT_TOKEN_TO_BE_REPLACED

– From its inception to the two-hour live finale, the Cruiserweight Classic was treated like the hand-crafted gift to the IWC it was meant to be. Where else on a WWE platform would you see the likes of Zack Sabre Jr., Cedric Alexander, Johnny Gargano, Rich Swann, Drew Gulak, Kota Ibushi and TJ Perkins among others do what they truly are known for? On top of it all was a credible commentary team of Mauro Ranallo and SmackDown Live General Manager Daniel Bryan. Through it all, we saw the rise of relatively unknown talent like Gran Metalik and Noam Dar to an American audience while indie mainstays like ZSJ, TJP and Alexander stepped their own games up to prove their worth. The opening video highlighted all the tourney’s happenings with a voiceover from Triple H as he talked about how far they’d come. From 32 men from 16 countries, it was now down to four men from four countries. We also heard separately from the final four, who were GM, ZSJ, TJP and Ibushi about how much the tourney meant to them.

END_OF_DOCUMENT_TOKEN_TO_BE_REPLACED

– NXT seems to be in a state of developing its own talent in a field with a few established diamonds. That has always been its niche and that seems more true than ever these days. With seemingly everybody notable up on the main roster now, we need new stars more than ever. Luckily, we had a good start with the TM61-Tony Nese/Ariya Daivari opener. The upstart Aussies appear to be second on the babyface tier of the NXT Tag Team Division behind Johnny Gargano/Tommaso Ciampa and this match helped propel them further into the scene with credibility. On the other side, we had Nese (who impressed in his Cruiserweight Classic performance) show off more reasons why he might be around to stay for a while, with his versatile style in offense. Daivari already made a good pest heel from what we saw in the CWC, but him and Nese gelled smoothly for a first-time team. We never got the sense that TM61 was the superior team, as it came off more evenly matched, but we could tell TM61 was going over at the end. Nese had some impressive spots and the babyfaces finished off the bout with their Thunder Valley finisher. We have a feeling TM61 will end up with Tag Title shots sooner than later.

END_OF_DOCUMENT_TOKEN_TO_BE_REPLACED

The Era Of Strong Style Begins

– With NXT back at home at Full Sail University, it was time to see some new feuds and stars develop as the next NXT TakeOver event looms in the coming months. We started off with a backstage segment with Samoa Joe, NXT General Manager William Regal and a medical trainer as Regal was told that due to numerous injuries caused to Joe at NXT TakeOver: Brooklyn II, he wouldn’t be cleared to compete any time soon. Joe, who was uncrowned of the NXT Championship at Brooklyn by NXT Champion Shinsuke Nakamura, was expectedly pissed and stormed away. Uh oh.