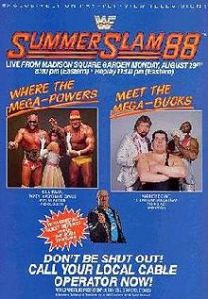 Much like the inaugural WrestleMania did three years prior, WWE stormed Madison Square Garden with a night of highs, lows and much in-betweens with the first SummerSlam event.

The magic laid in a “surprise” moment of Ultimate Warrior beating Honky Tonk Man in a mere 30 seconds to win the Intercontinental Championship and Miss Elizabeth wearing a bikini bottom to distract the heels in the main event.

In terms of actual memorable wrestling contests, not quite as magical, despite a strong opener, which ultimately disappointed.

We’ll get to all of that fun stuff below.

END_OF_DOCUMENT_TOKEN_TO_BE_REPLACED

Third Match Is The Charm

– The opening video highlighted the “dusty finish” from Elimination Chamber as perfectly as possible with trusty slow-motion capture.

END_OF_DOCUMENT_TOKEN_TO_BE_REPLACED

At the end of it all, we got the desired result.

We can at least say that for the WWE World Heavyweight Championship match, where Seth Rollins retained and Kane undoubtedly chose to remain loyal to the Authority in the process.

The rest of the night had its share of thrillers, as the night started out hot, ended up hollow somewhere in the middle, but recovered enough by the end to make this night an above-average effort.

WWE risks feud overexposure with four Pay-Per-Views in the span of eight weeks, but it’s so far, so good.

Let’s run through the show, shall we?