– The opening video chronicled Vince McMahon’s promo last week on Raw where he’d confidently recognize Shane McMahon as someone who’d lose everything if he lost to The Undertaker at Hell In The Cell at WrestleMania. Taker made it clear Shane’s blood would be on Vince’s hands, with nice archival footage of Taker wreaking HIAC havoc. Not sure why they dragged out a short segment for a three-minute video because it didn’t have the emotional impact for it but either way, it’s Raw from Chicago, so let’s get to it.

END_OF_DOCUMENT_TOKEN_TO_BE_REPLACED

The League Of Authority

– The opening video highlighted WWE World Heavyweight Champion Triple H’s walloping of Roman Reigns at the end of last week’s Raw in a bloody assault, the Champion christening himself as the almighty, untouchable authoritative law in WWE.

END_OF_DOCUMENT_TOKEN_TO_BE_REPLACED

Notes In Observance – WWE SmackDown 2/25/16: Sympathy For The Devil

Sympathy For The Devil

– The opening video reminded us all of that time Roman Reigns outlasted both the “Ambrose Asylum” and “Suplex City” in one night, defeating Dean Ambrose and Brock Lesnar to earn the main event spot at WrestleMania, fighting WWE World Heavyweight Champion Triple H.

END_OF_DOCUMENT_TOKEN_TO_BE_REPLACED

– One night after Fastlane, the opening video highlighted the triple-threat main event between Roman Reigns, Dean Ambrose and Brock Lesnar, with the winner moving on to face WWE World Heavyweight Champion Triple H at WrestleMania. As you’d imagine, the video showed us suplexes, low blows, brotherly teamwork, two announce table powerbombs, steel chairs and an asylum-crumbling spear from Reigns to win. Despite WWE’s keen editing team’s attempts, the crowd wasn’t all that enthusiastic to the victory.

END_OF_DOCUMENT_TOKEN_TO_BE_REPLACED 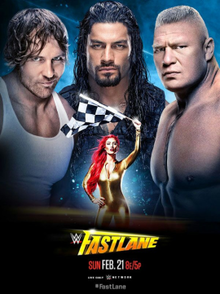 Another year, another chance for Roman Reigns to get into the WrestleMania main event and another year where he wins said chance.

Last year, it was against a heavy fan favorite in Daniel Bryan to take on the WWE World Heavyweight Champion at the time, Brock Lesnar. Fans were so into Bryan’s return that they actually forced Mania plans to change again, with Reigns needing to beat him to get to Mania and be bought as a “main-eventer.”

This year, we have Reigns (who already had a World Title run) gunning for the same position, only Triple H is Champion, Lesnar’s in his way as is his “brother” Dean Ambrose, the heavy fan favorite.

Predictable booking squandered all a great main event could offer and despite some good matches, an odd final few segments/matches won’t leave Fastlane 2016 in the “classic shows” conversations.

END_OF_DOCUMENT_TOKEN_TO_BE_REPLACED

– The opening video hyped the big triple-threat Fastlane main event between Dean Ambrose, Roman Reigns and Brock Lesnar – “Brother Vs. Brother Vs. Beast,” if you will. The video primarily focused on Ambrose talking about being in the “fight of his life” and how him wanting Lesnar turned into suffering an F5, Stephanie McMahon style, when she made him defend his WWE Intercontinental Championship against four other men and ended up losing the belt to Kevin Owens without even being pinned. The main question was what the Title loss did to Ambrose’s psyche.

END_OF_DOCUMENT_TOKEN_TO_BE_REPLACED

– The opening video showcased the events of last week’s Raw – WWE Intercontinental Champion Dean Ambrose’s toughness, Brock Lesnar’s utter destruction and Roman Reigns simply hanging in the background, while others tried to throw stones in the fire that is the “brotherhood.”

END_OF_DOCUMENT_TOKEN_TO_BE_REPLACED

– SmackDown’s beginning to carve its own identity, with a solid three-man broadcast team possessing esteemed credibility and actual matches hyped from Raw, case in point, the AJ Styles-Chris Jericho rematch. We were assumedly getting the match as the main event, so it was surprising to see Jericho come out so soon. His starting promo was good for being the match intro, as he talked about this night being important for him because he’d finally get his rematch and expressed how he respected Styles, but didn’t like him. Even liked him bringing up how he was in Portland, Oregon and how he had the match of his career in 2008 in the same building against Shawn Michaels, taunting Styles with the line that “phenomenal wasn’t good enough for Y2J.” The match was about to start and out came The Social Outcasts (sans Bo Dallas) of all people and we were pretty sure where this was heading, since it’s SmackDown and all. The Teddy Long Special… On that note, pretty rough night on the mic for SO, who fell flat with their comedy attempts, even if “Axel Rose” was a cool take on Guns N’ Roses. Luckily, Jericho put an end to that and it was on to impromptu tag action.

END_OF_DOCUMENT_TOKEN_TO_BE_REPLACED

– With the road to WrestleMania set to full-gear drive, we were hit with news earlier in the day by various outlets that spoke of Daniel Bryan retiring at age 34, but all of us hoped it was a last-second swerve to get fans hyped for Fastlane or WrestleMania but as we came to find out, it was indeed true. If they were going to do it, it had to be done in Seattle, Washington, not far from Aberdeen where Bryan hails from. It was awfully strange to suddenly hear Bryan references galore, as it seemed like WWE was avoiding bringing him up entirely due to concussions, but this was the night to let the Yes Movement enjoy its revival. Also liked the little additions to the opening montage.

END_OF_DOCUMENT_TOKEN_TO_BE_REPLACED

– The opening in-ring segment with Brock Lesnar, Paul Heyman and WWE Intercontinental Champion Dean Ambrose was likely designed to explore the wrinkle of a Lesnar-Ambrose interaction and it was what we expected, yet something about it felt empty. At least it was nice to not have Roman Reigns open the show for a change. We also dug the new red “Suplex City” shirts, since it makes it appear as if the highway sign is smeared with blood. Ambrose did look tough for interrupting Heyman and standing in Lesnar’s face, telling him he wanted to go to Suplex City all for the belt. Heyman also addressed the Wyatts, so that makes us think maybe Bray Wyatt does something to take Lesnar out of the picture.