WWE In Your House 6: Rage In The Cage Reaction 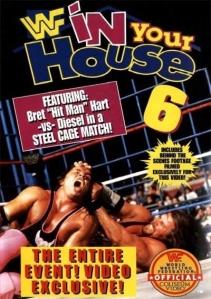 “In Your House 6 – Video Cover” by Source (WP:NFCC#4). Licensed under Fair use via Wikipedia

Most are familiar with the 60-minute Iron Man match between Bret Hart and Shawn Michaels at WrestleMania XII, but not as quite with the road to get there.

This show was all about getting to that point, making both Hart and Michaels look good in their respective matches and making some more WrestleMania matches in the process.

This was also the first official WWE Pay-Per-View in February, making it this month’s “Throwback PPV.”

– The opening video showcased Sunny on the beach. Boy, have times changed. The video package solidly hyped Bret Hart-Diesel’s match all focused on the WWF Championship.

– Vince McMahon was very enthused to be in Louisville, Kentucky. Also, Jerry The King Lawler was such a good heel commentator. What has he become these days?

– The basic story behind the Razor Ramon-1-2-3 Kid (w/Ted Debiase) match was decent, but the “Baby Diaper/Bottle” stipulation was downright ridiculous. Was someone a baby daddy? Why the carriage stuff? It was funny to see that Kid broke out the crotch chop when he played to the crowd. Little significance back then. If you count the amount of baby-related references on commentary as a drinking game, damn, you’d be drunk. The guys worked well together and did some cool spots, the fall away slam from the top rope stuck out and Ramon won after two Razor’s Edges once Kid tried to throw baby powder in Ramon’s face and it backfired. The moment of Ramon making Kid drink from a baby bottle, putting a diaper on over his white wrestling tights and dousing him and Dibiase in powder wasn’t as memorable as you’d think. Johnson’s Baby Powder got a lot of advertising here. Product placement?

– The interview with Duke The Dumpster Droese seeking payback time for being pedigreed and getting his haircut by HHH was okay. His voice was loud and screechy.

– The Hunter Hearst Helmsley (w/Elizabeth Hilden)-Duke The Dumpster match wasn’t anything particularly memorable besides Lawler clearly having his eyes on Hunter’s valet. How unceremonious. Could Helmsley’s music be any more sleep-inducing? Worse than elevator music.

– An adult Undertaker one-size-fits-all sweatshirt for $29.95? Gosh – what a bargain.

– Yokozuna was billed as 700 pounds? Something about that just doesn’t sound right. His promo towards Jim Cornette, Owen Hart and British Bulldog was actually pretty good. Why didn’t they let him cut promos more often?

– The Yokozuna-British Bulldog match was okay as it was mainly Yokozuna absorbing Bulldog’s punishment and retorting back with his own offense. The blatant DQ with Cornette hitting him with the tennis racket was stupid, but this allowed for the moment everyone waited for: Yokozuna getting revenge on him. Well, almost. Vader showed up and hit Yokozuna and handcuffed him to the ring rope. Yes, ringing the bell 18,000 times in a row will stop the attacks. Vader’s mask came off. Those racket shots sounded like they hurt.

– Goldust and Marlena had him hype up a match on Raw against Razor Ramon for the Intercontinental Championship. Almost forgot what Goldust looked like with a wig. His trademark promo.

– It’s scary how similar the backstory of the Shawn Michaels-Owen Hart match was with Michaels putting his guaranteed WrestleMania Title shot on the line to the Reigns-Bryan storyline headed into the FastLane 2015 PPV. This match literally had Mania repercussions. He might’ve also danced on the roof set. Who knows?

– Michael’s promo was inspiring as usual and certified him as a risk-taker and tough guy. Good stuff.

– The Owen Hart-Michaels match was definitely very physical with lots of athleticism shown by both men. Strong finish as well as this was Michael’s year of his “boyhood dream.”

– The Rowdy Roddy Piper pulled his usual promo as “Acting WWF President.” It’s just funny considering he would be in WCW this time about a year later fighting for the World Title. Piper pulled no punches promising Michaels to show up to Mania for a fight, that he wasn’t sorry for Yokozuna being beaten down, insulted Vader and announced Vader-Yokozuna for Mania. Piper insulting Cornette was good stuff. Their interaction was fun to watch.

– The WWE Championship steel cage match between Diesel and Bret Hart was a good match – also quite physical and good use of the cage. Diesel looked to be the winner until Undertaker rose through the apron and dragged him under. Sounds about right, and it hyped their matches well.