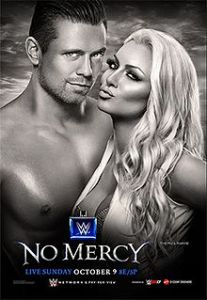 In an unprecedented period where we had five pro wrestling pay-per-views between Sept. 11 and Oct. 11 between WWE, Ring Of Honor and Total Nonstop Action Wrestling, we were exhausted by Oct. 9 when No Mercy rolled around.

Luckily, if you look at that nice poster to the side, SmackDown Live had been headlined by the excellent heel duo of WWE Intercontinental Champion The Miz/Maryse as he was engaged in a “Title Vs. Career” feud with Dolph Ziggler.

That feud would become synonymous with this show for reasons we’ll explore below.

It also helped that we had a Triple-Threat main event for the WWE World Heavyweight Championship between Champion AJ Styles, Dean Ambrose and John Cena that actually opened the show for a change.

Cool on the surface, but that brought us to the problem – one disorganized card.

END_OF_DOCUMENT_TOKEN_TO_BE_REPLACED

– With the star-studded trio of John Cena, Dean Ambrose and WWE World Heavyweight Champion AJ Styles all coming to a head by the end, they were wise to hype this from the opening video. They were set for battle at No Mercy just five days away.

END_OF_DOCUMENT_TOKEN_TO_BE_REPLACED

– This episode boasted a WWE World Heavyweight Championship main event between Champion AJ Styles and Dean Ambrose. The opening video wasted no time hyping this huge match. Plain and simple stuff. Oh, there’s that theme we love so much.

END_OF_DOCUMENT_TOKEN_TO_BE_REPLACED

– With two big main events hyped, John Cena would fight Dean Ambrose and the WWE Intercontinental Championship would be on the line as Champion Miz defended against Dolph Ziggler, we already had a fun show on our hands. After we suffered through what felt like forever the night before, we were welcome to change.

END_OF_DOCUMENT_TOKEN_TO_BE_REPLACED

Notes In Observance – WWE SmackDown Live 9/13/16: The Champ That Runs The Camp

The Champ That Runs The Camp

– As we expected, the opening video showed us the biggest highlights of the Backlash Pay-Per-View: Becky Lynch became the first-ever WWE SmackDown Women’s Champion, Maryse helped The Miz retain the WWE Intercontinental Championship against Dolph Ziggler with a foreign substance spray, Randy Orton and Bray Wyatt played a game of “I can injure you better than you can injure me,” there was a No Holds Barred match, an announce table (not the Spanish one) was broken, Heath Slater received both a WWE SmackDown Live contract and the WWE SmackDown Tag Team Championships with Rhyno and arguably the biggest news – AJ Styles defeated Dean Ambrose with a low blow and a Styles Clash to complete his rise to the top with the company’s most coveted prize, the WWE World Heavyweight Championship. Follow-up shows are always fun. Let’s hope this is one of those episodes.

END_OF_DOCUMENT_TOKEN_TO_BE_REPLACED

Notes In Observance – WWE SmackDown Live 9/6/16: Done With That

– With Backlash five days away, WWE wasted no time getting its first SmackDown Live-Exclusive Pay-Per-View hyped up and ready to go. The opening in-ring segment with SmackDown Live General Manager Daniel Bryan, Becky Lynch, Carmella, Nikki Bella, Alexa Bliss, Natalya and Naomi was a good start to things to hype the Six-Pack Elimination Challenge to crown the inaugural WWE SmackDown Women’s Champion between the ladies, as Bryan stood in the middle of it all. We got to see Lynch talk about her long journey and acknowledge her shortcomings as a kind of motivation. Natalya was a downer who called Lynch “boring,” while Bliss referred to everyone as “whiners” and insulted Bryan for being a “trophy husband.” Carmella got the last words when she bragged about her beatdowns on Bella. Eventually, the heels cornered Lynch and out came Naomi/Bella to back her up. We knew beforehand that we’d see a Six-Woman tag and that was easy to hype right from here.

END_OF_DOCUMENT_TOKEN_TO_BE_REPLACED

– With the inception of SmackDown Live as this “anything goes” kind of show, there were several moments on this episode that gave it that vibe and we’re all for it. They even managed to push the “Talking Smack” post-show “show” as something to always keep an out for, as they opened with the hot exchange we saw there between SmackDown Live General Manager Daniel Bryan and WWE Intercontinental Champion The Miz after Miz blew up on Bryan when he was referred to as a “coward.” It might’ve actually been one of Miz’s best promos ever. Complete fire. Definitely intense.

END_OF_DOCUMENT_TOKEN_TO_BE_REPLACED

– Headed out of WWE SummerSlam on the SmackDown Live side was the news that AJ Styles cleanly pinned 15-time World Champion John Cena in the ring and despite a close effort (in a dud match), Dolph Ziggler didn’t fulfill his opportunity against WWE World Heavyweight Champion Dean Ambrose and fell short yet again. It was a smart idea to have the gloating Styles and upset Ziggler collide in the locker room based off SummerSlam alone. The only thing that confused us was a random locker room as Baron Corbin talked to Erick Rowan (with the sheep mask on) and Apollo Crews spoke with Rhyno. Like, what? Anyways, Styles had Ziggler snapping at him coming since he called the guy a loser to his face. Styles has comfortably settled into the “pest heel” role and it doesn’t hurt to have a solid character behind the guy who can go in the ring.

END_OF_DOCUMENT_TOKEN_TO_BE_REPLACED

– The opening backstage segment with Commissioner Shane McMahon, General Manager Daniel Bryan, Randy Orton and Heath Slater was a fine open to the show, as we saw Orton officially sign off on the contract that ensured that he and Brock Lesnar would battle at SummerSlam, only five days away. Slater continued to use his “Free Agent” gimmick more to the comedic side, as he presented Bryan/Shane a fruit basket (likely stolen from a funeral parlor, funny) since he recalled them close to signing him, before they said no because of how they were dissed. We were left with how Orton “had an idea.” Wonder what that could possibly be. At least there was a tie with Slater to Lesnar. It’s actually pretty smart to have the one guy who could bounce back and forth between shows interact with the two feuding guys on separate shows.