– Just when we thought maybe WWE would duck their way around a month without Roman Reigns with no mentions, they went right to it thanks to Seth Rollins and the opening segment that also involved WWE World Heavyweight Champion Dean Ambrose, AJ Styles, John Cena and Stephanie McMahon. Now, the way Rollins did it was fine, but WWE relies on big screen graphics a little too much. Took the fun out of that, but at least it grabbed our attention. Rollins milked himself up at Reigns’ expense to get cheers and tried to push for a one-on-one rematch which drew out Ambrose, who stood by Reigns and said everyone made mistakes. Styles was a good fit in the segment since there was a chance now to add more people to the Battleground match and once Styles was out, Cena was only going to be next. Styles and Cena also had valid reasons for being added separately. It also fit Steph’s character to despise Ambrose as Champion since he goes against the “corporate image” and anything to increase his odds of losing wasn’t unheard of. Plus, it gave us two matches to make the show more interesting as we learned Cena and Styles would be added respectively to the match if Cena beat Rollins and Styles beat Ambrose. Everyone essentially got what they wanted.

END_OF_DOCUMENT_TOKEN_TO_BE_REPLACED

– Obviously, it made sense to open with the appropriate moment of silence for the Orlando shooting victims, just like Slammiversary did.

END_OF_DOCUMENT_TOKEN_TO_BE_REPLACED 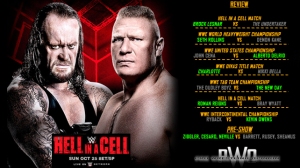 This show had everything from top-notch bouts (Brock Lesnar-Undertaker Hell In A Cell, anyone?) to surprise returns (Alberto Del Rio/Zeb Colter) and regrettably, unspectacular Title defenses.

The closing angle also gave us a moment of shock, anger and anticipation towards Survivor Series, as the focus shifts to The Undertaker’s 25th anniversary.

END_OF_DOCUMENT_TOKEN_TO_BE_REPLACED

WWE Hell In A Cell 2015 Preview/Predictions

WWE’s in a panicked state of panic right now, but if they were curious why the television ratings are so down, they should look at their stagnant creative direction and lack of pushed new stars.

Point in example – WWE World Heavyweight Champion Seth Rollins is defending his Title – not against any hot upstarts like Neville or Cesaro – but against Demon Kane, a guy who has been around for nearly 20 years. This is the main program dominating TV the past month.

On top of that, other recent storylines range from a love square where all four individuals have been with each other at various points and who can forget the pointless Divas drama, where the focus is more about arguments than the Championship?

We’ll break this all down, but we can only hope the card impresses more than the storylines.

END_OF_DOCUMENT_TOKEN_TO_BE_REPLACED

– The opening segment with WWE World Heavyweight Champion Seth Rollins-Corporate Kane saw both guys rub in each other’s faces about this show being potentially the last for each as respective Champion or employee. Corporate Kane informed Rollins that he had a match coming up next and if he tried to flee, “somebody” would keep him right where he was. After Rollins walked away, New Day’s Big E/Kofi Kingston approached Corporate Kane and said how disgusted they were that Xavier Woods was taken out and they were “only two unicorns now.” Um, okay, these are supposedly three badass/funny heels? It doesn’t work in this instance. Anyways, this was a good way to set up the main event, as Corporate Kane booked them to take on Roman Reigns/Dean Ambrose to “cheer them up” as he played the world’s smallest trombone. That said, there was also high energy in this segment, to give the impression that the show was starting off with a bang.

END_OF_DOCUMENT_TOKEN_TO_BE_REPLACED

– The Roman Reigns-Bo Dallas match was an obvious squash the moment Bo’s music hit. Dallas came out cutting an insulting promo that focused on Reigns coming up short against Bray Wyatt and that he didn’t survive Suplex City like he did. Let’s commence the whipping. To their credit, commentary talked up the dangers of the Hell In A Cell match, using it to pinpoint that Reigns’ own cousin Rikishi was “never the same after his HIAC match.” Hmm. There was more to that than just the HIAC, but we digress. This was quickly over not long after with a swift Superman Punch/Spear combo. Oh now we’ve got another Reigns promo. Oy. We gathered that Wyatt’s eyes are the depth of hell and Reigns is bringing the fight because he was riding straight into hell. A Wyatt response too? He mentioned that he’d deliver a prophecy on Raw. Guess we’ll see what that’s all about then. Standard stuff.

END_OF_DOCUMENT_TOKEN_TO_BE_REPLACED

The Demon Runs The Asylum

– So, let’s get this one straight: a company that continuously pushes its social media influence wants its viewers to believe that The Authority (Triple H and Stephanie McMahon) cannot bother to look on Facebook or Twitter to check out how Corporate Kane would be running the show, since he was left in charge with their plane “running very late” throughout the show? This is 2015. If WWE wants its storylines to come across logically, they need to take these things into account. With The Authority out of the picture, we had to know Corporate Kane would book himself against WWE World Heavyweight Champion Seth Rollins in the main event, which just so happened to be a lumberjack match. Why oh why would he not have the Title on the line? We were supposed to believe that Trips/Steph had no idea what was going on whatsoever. Sigh.

END_OF_DOCUMENT_TOKEN_TO_BE_REPLACED

– The opening video again focused on last week’s Raw developments, as Ashley HR found Corporate Kane “sound of mind to fulfill his duties” and WWE World Heavyweight Champion Seth Rollins took him out, until Demon Kane came out of the ambulance and attacked him. Yup, like nothing happened on Smackdown or the freakin’ MSG special.

END_OF_DOCUMENT_TOKEN_TO_BE_REPLACED 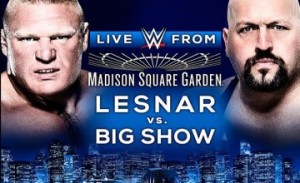 With another installment of recent exclusive WWE Network live specials, this time we had the spectacle of seeing Brock Lesnar make an appearance in the “World’s Most Famous Arena” – Madison Square Garden in New York City, in action against The Big Show, a match 13 years revisited in the same arena.

Also on the card was The New Day defending the Tag Team Championships against the “hometown” Dudley Boyz, who were going for their 10th Tag Title reign.

Ultimately, this ended up just being a glorified house show, with nothing out of the ordinary occurring.

END_OF_DOCUMENT_TOKEN_TO_BE_REPLACED

– The opening video highlighted the Raw “Kane Job Evaluation” segment where Ashley from HR (that’s human resources in case you weren’t sure) found Kane “in full sound of mind,” leading to WWE World Heavyweight Champion Seth Rollins to go in full denial mode before essentially taking out Corporate Kane’s leg and put him in an ambulance, who broke out of said ambulance as the Demon, exacting revenge. Watching what unfolded for over 20 minutes on live TV condensed into a two-minute video was a relief, but the video also made Demon Kane’s ambulance rising look awfully kooky. Yep, TV ratings are slipping and you wonder why. Stuff like this is leading the program. Yes, we like Corporate Kane and it’s nice to see Demon Kane back and we expected a “challenger of the month” out of this, but it didn’t have to be the lead storyline.