– Alex Shelley was on commentary with Ian Riccaboni as Coast To Coast (LSG/Shaheem Ali) came out to battle ROH World Tag Team Champions, The Young Bucks. Once YB’s music hit, our hopes of anything purposeful for a CTC push went out the window. With a superkick-tastic pre-taped promo from YB as they hyped their encounter against The Hardys at Supercard Of Honor XI on April 1, it was obvious where this one would go. YB broke out their typical aerial antics along with a few moveset references to The Hardys. Good, subtle stuff. LSG did a sweet corkscrew springboard plancha. CTC did get to do their namesake double team, but in the end of things, the superkicks (way over with this crowd) did them in and a springboard 450 splash won it for YB. Post-match, YB did a Twist Of Fate/Swanton Bomb combo on Ali to send a clear message to The Hardys. We also liked that their post-match ambush style fit into their “rebellious” ways.

END_OF_DOCUMENT_TOKEN_TO_BE_REPLACED

– Backstage, the foursome of The Briscoes, Jay Lethal and Bobby Fish each took turns to say mean things about Bullet Club. Such insults included the outrageous labeling of them as “fake” and “t-shirt sellers.” Such daggers we got over here. Anyways, what made this memorable for us was Lethal’s labeling of their unit as “The Dream Team,” since they each targeted different BC members. Fish spoke about wanting to end ROH World Champion Adam Cole “if he chose to.” We’ll guess that Cole retained at Manhattan Mayhem?

END_OF_DOCUMENT_TOKEN_TO_BE_REPLACED

Notes In Observance – ROH Wrestling 2/8/17: Taking Umbrage To The Umbrella

Taking Umbrage To The Umbrella

– The Punishment Damien Martinez/BJ Whitmer-War Machine match carried off past quarrels where a match went to the wayside for the purpose of pointless brawling. At least it gives the four something to do, as Martinez’s future’s the most to gain here. It also helped this episode that Colt Cabana was on commentary in classic boastful heel mode. We also liked the little touch that WM wore face paint. It adds to their look, albeit in a “Braveheart” way. Whitmer seems to get “go away heat” and that continued here as not much action occurred. There was a moment where Hanson performed a spot where he repetitively ran his opponents in the corner, to the point the fans did the rally cries with him. It lasted about a minute, legitimately. There were some consistent double-teams on both ends, including an impressive pop-up powerslam by WM. The finish is where things get silly again, because the four men are so into the brawl, the damn 20-count passes them right by. Countouts in ROH are just ridiculous. The only solace taken here was that Martinez/Hanson could make an intriguing singles match one day. Let’s hope they go that route.

END_OF_DOCUMENT_TOKEN_TO_BE_REPLACED

– The Six-Man Tag between The Rebellion and Donovan Dijak/Jay White/Lio Rush was a clever followup to a previous angle where Dijak/White saved Rush when he upset Caprice Coleman in one-on-one action. Rush/White continue to impress with their athleticism. Dijak’s finally in a position where he’s free to do more in the ring as a babyface, not tied down to that senseless association with Prince Nana. Dijak easily tossed Coleman out of the ring, while it was noted that Rush wore kinesio tape to sell the left shoulder injury. Fast action on both ends as Rush avoided Rebellion’s onslaught to get a tag in to White. Rush delivered missile-like suicide dives on opposite ends of the ring. The babyface trio then did simultaneous dives to the outside on each side of the ring. Decent finish as we saw Rush hit a frog splash off Dijak’s shoulders (he’s tall so it works) followed by Dijak’s moonsault to pin Coleman. The post-match angle was more of the same, as Rebellion beat down White and teased the same to Coleman before they set him down gently (another tease for him to be recruited) before The Motor City Machine Guns came down to patrol.

END_OF_DOCUMENT_TOKEN_TO_BE_REPLACED

– Christopher Daniels’ hype video promo did a good job of showing his refocused goal of his “destiny to become Champion” in the midst of the Decade Of Excellence Tournament that he was a part of. He defeated Mark Briscoe last week to advance to the second round. He spoke about how he made a name for himself in 2002 and they wisely played back footage of those classic Murphy Rec Center days when he denied handshakes and broke the mold as the face of The Prophecy, despite never holding the ROH World Championship. They flashed back to now, to where he gives those handshakes and obeys the Code Of Honor, a presumed changed man. With this kind of package, we could tell this next push was set to be a serious one. It also helps to get more passionate promos like this one, because that’s what Daniels does best these days.

END_OF_DOCUMENT_TOKEN_TO_BE_REPLACED 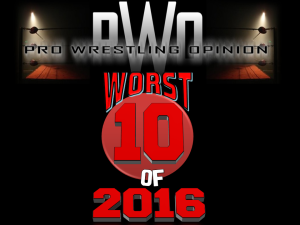 Whether it was “Broken” Matt Hardy, Chris Jericho’s transformation into a walking meme, Goldberg’s unexpected return or the Cruiserweight Classic, everywhere you looked, there was something to talk about.

For all those moments however, came some head shakers.

With the unenviable task to cover every single 2016 episode of Raw, SmackDown (even before it was “Live”), NXT, Impact Wrestling and Pay-Per-View/Live Specials (all 29), we’ve seen things that cannot be forgotten.

We’re here to bring them to light.

END_OF_DOCUMENT_TOKEN_TO_BE_REPLACED

By Honor, For Honor

– If anybody hoped for meaningful post-Final Battle television, look elsewhere. However, since already here, why not stay awhile? We’ll keep you comfortable. Anyways, the Cheeseburger/Will Ferrara-Tempura Boyz match was throwaway material, but some decent action involved. Joey “Diesel” Daddiego (The House Of Truth’s former J. Diesel) was on commentary and put over Ferrara/Cheeseburger as hard workers in the dojo. Daddiego used to come off like a mini-Batista, but now that he talked, he was like a hybrid of Taz and Nunzio. At least Cheeseburger continues to grow in popularity. That shouldn’t be hard. The guy’s freakin’ name’s Cheeseburger. Fast-paced action as you’d expect. TB hit a nice codebreaker/German suplex combo before they won with a superkick/package piledriver combo on Cheeseburger. TB seem cool, though we still don’t know much about them besides their tasty name. Cheeseburgers and Tempura. Yummy. The post-match angle with Prince Nana and Donovan Dijak continued the inevitable Nana/Dijak split, as the manager demanded his client to “get this wet” and make easy work of Ferrara. Dijak showed brief hesitation before he picked Ferrara up and slammed him down twice. That prompted Daddiego to leave the booth and confront Dijak, as he challenged him to a match. Sure, why not?

END_OF_DOCUMENT_TOKEN_TO_BE_REPLACED

– With the team of Colt Cabana/Dalton Castle still fresh on the tag scene, they needed wins to score some credibility. With a shot at the ROH World Tag Team Championships at a Baltimore live event soon to come, this was a golden chance to keep the babyface team hot and they shelled out some new talent from New Japan Pro Wrestling in The Tempura Boys to do the process. While it felt like commentary spoke too much about TB and how they wanted to be known by only their first names, the actions of Cabana/Castle were enough to tell the right story. A smart mix of comedy, fast-action and great double-team moves, Cabana/Castle easily got past TB when Castle hit the Bangarang to score the pin.

END_OF_DOCUMENT_TOKEN_TO_BE_REPLACED

Notes In Observance – ROH Wrestling 9/28/16: A Tightened Grip On Legacy

A Tightened Grip On Legacy

– The Silas Young-Toru Yano match was a randomly thrown out on television to air out the two’s character differences, all the more clear as Young was angry and Yano was a jokester. Kind of entertained at Young’s heel skills, as he even yelled at a kid on his birthday and wished him a terrible one. Yano’s charisma was on display as he purposely ticked off Young several times with his humor and did his signature spots from New Japan Pro Wrestling where he took the turnbuckle pad off and performed a low blow, all behind the Referee’s back. There were some good trades of near-falls towards the finish, as it came down to Young’s use of Yano’s own tactics against him to win on a point where he pulled the tights after a low blow. Young certainly needed the win and that was good to see, but we were baffled at why this would take place on the All Star Extravaganza go-home show, that was until the post-match angle where The Briscoe Brothers saved Yano from a further beatdown by Young. This made sense since Yano and The Briscoes would be partners at ASE as they’d pursue the Six-Man Tag Team Tournament.

END_OF_DOCUMENT_TOKEN_TO_BE_REPLACED

– The opening video sent us back to Ring Of Honor’s Death Before Dishonor XIV Pay-Per-View when ROH World Champion Adam Cole shocked the world and defeated Jay Lethal to win the belt before he was soundly laid out by an angry Kyle O’Reilly.