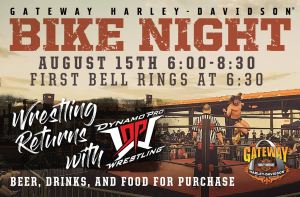 *The Following Press Release Was Issued By Dynamo Pro Wrestling*

C.J. Shine had been looking to regain his momentum after completing his first reign as Dynamo Pro Wrestling heavyweight champion in 2018. Since winning the Gateway Harley-Davidson championship at our last “Bikes, Beer, and Body Slams” event, C.J. Shine has competed in many high-profile matchups. His challenger, The Snitch, has complained for over six hundred days that he has not received a chance at either the Dynamo Pro Wrestling D-1 or heavyweight championship. The current Dynamo Pro Wrestling RIOT on the River tournament champion, The Snitch outlasted all other competitors in a battle royal at the last “Beer, Bikes, and Body Slams” event to become the number-one contender for the Gateway Harley-Davidson championship. The next chapter in this long-standing rivalry will take place on Thursday, August 15th, 2019 at Gateway Harley-Davidson in St. Louis, Missouri.

Since 2007, Dynamo Pro Wrestling has strived to bring professional wrestling fans of all ages with hard hitting, fast paced, edge of your seat professional wrestling action. For additional information on Dynamo Pro Wrestling, you can check out our website at www.dynamoprowrestling.com, follow us on Facebook at www.facebook.com/dynamopro, and on Twitter at www.twitter.com/DynamoPro.

Since April 2002, Gateway Harley-Davidson has taken great pride in being part of the St. Louis, Missouri area and we believe in giving back to those in the community. We strive to excel when it comes to providing the greatest customer experience possible for every single customer that walks through our doors. For additional information on Gateway Harley-Davidson, you can check out their website at https://www.gatewayharleydavidson.com. You can also follow them on Facebook at https://www.facebook.com/GatewayHarley and on Twitter at https://www.twitter.com/GatewayHarley.