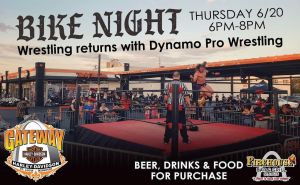 *The Following Press Release Was issued By Dynamo Pro Wrestling*

Since 2007, Dynamo Pro Wrestling has strived to bring professional wrestling fans of all ages with hard hitting, fast paced, edge of your seat professional wrestling action. For additional information on Dynamo Pro Wrestling, you can check out our website at www.dynamoprowrestling.com, follow us on Facebook at www.facebook.com/dynamopro, and on Twitter at www.twitter.com/DynamoPro.

Since April 2002, Gateway Harley-Davidson has taken great pride in being part of the St. Louis, Missouri area and we believe in giving back to those in the community. We strive to excel when it comes to providing the greatest customer experience possible for every single customer that walks through our doors. For additional information on Gateway Harley-Davidson, you can check out their website at https://www.gatewayharleydavidson.com. You can also follow them on Facebook at https://www.facebook.com/GatewayHarley and on Twitter at https://www.twitter.com/GatewayHarley.