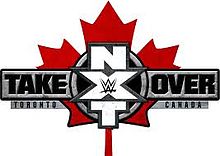 NXT found its way “North Of The Border,” but didn’t lose any luster.

Like we’ve come to expect from the TakeOver specials, we had a solid card with some spectacles ready to deliver, which also included Mickie James’ return and a couple of hot rematches for the NXT Tag Team Championship and NXT Championship.

– The opening video did a cool job as it emphasized the historical pro wrestling significance of Toronto, which was home to talent like Edge and Trish Stratus. Also highlighted were moments like Hulk Hogan and The Rock at WrestleMania X8. This swiftly transitioned into current feuds while Beartooth’s “Hated” played over the scenery. The crowd of 12, 649 went nuts.

– The Tye Dillinger-Bobby Roode match had an angle headed in of two Canadian natives that wanted to tear each other apart. It probably also helped that each man had a unique, interactive entrance. No better way to open a show than with a choir to sing Roode’s “Glorious” theme song, which went over well. Dillinger’s pop was equally big. Their work might’ve been cut out early on, since the entrances could’ve superseded the actual match. The backstory hype was big, as this was an “emotional” night for Dillinger, who looked to get revenge on Roode after he was abandoned in the Dusty Rhodes Tag Team Classic when it was Roode who asked him to be his partner. Cool spot early on where Roode held up his hands while on his knees and inadvertently mocked the “10” gesture, only to set Dillinger off further. The crowd had their own spin on things, as they chanted “10” for each one of the Referee’s ring counts. They cheered Dillinger heavily as he unleashed a rapid-fire offense. Roode worked well to get great heat as he continuously mocked Dillinger and teased a Tye Breaker. As things went on, we saw some nice near-falls worked in. Big pop for Dillinger’s Sharpshooter before Roode got to the ropes. This led to the finish where Roode hit the Glorious DDT after he shoved Dillinger into ring posts on opposite sides to get the win. Now, that was a great match that actually helped elevate Dillinger as someone who could be a big player down the road. Roode also continued his run with probably his best effort to date. Props to the crowd too for never letting up.

– The Dusty Rhodes Tag Team Classic Tournament Finals between TM61 and The Authors Of Pain was indicative of the Tournament as a whole – underwhelming. To add some intrigue, they hung Paul Ellering above the ring in a shark cage in a throwback to NWA tradition. This was General Manager William Regal’s “answer” to Ellering’s repeated interference to help his boys. On paper, it was a decent matchup. TM61 were the hearty Aussie athletes against the beastly AOP. That said, the cage lowering music was dramatically bad, so we instantly rolled our eyes there. An early highlight was easily Shane Thorne’s senton off the structure that supported the cage. Scary spot afterwards where it looked like Thorne got flipped around to land on his neck on the apron. Hard to tell if he sold his neck or if it was legit. More decent action that led to the predictable scenario where Ellering dropped a chain from the cage down to Razar for him to use. It ended up in the crowd (look out) and TM61 initially avoided The Last Chapter, but the epilogue was all about an AOP Tourney victory. Not a shocker, since they kept AOP strong. Triple H and Regal came down to present the trophy, as did Dustin Rhodes. This year’s Tourney paled in comparison to last year, but at least the Tag Team Division has some form of substance at this time.

– The NXT Tag Team Championships Best Two-Out-Of-Three Falls match between Champions The Revival and #DIY already had high expectations since both teams stole the show in Brooklyn in August. With these four men known to create in-ring electricity, we appreciated the build’s attention to detail. The focus was on #DIY and their disappointment of coming up short, while the Champs took pride in screwing them over on multiple occasions, most recently out of the Dusty Classic. This was billed as #DIY’s “last chance,” as this was all that they had left. The first fall saw a plethora of fast-paced physicality with back-and-forth action. Before we could settle in, it was The Revival with a 1-0 advantage as they hit Shatter Machine on Johnny Gargano after an avoidance of his slingshot spear. The second fall was more thought-out, as the heels smartly targeted Gargano’s shoulders. Some excellent heel antics, as they dragged out the hot tag to Tommaso Ciampa as much as humanly possible. Gargano took a beating, but nobly kicked out of the Hart Attack. After every scenario possible, we finally got the hot tag to Ciampa, who attacked Scott Dawson with a barrage of German Suplexes and knee strikes. Eventually, #DIY got to hit their double-team finisher on Dawson to tie things up. This became great stuff quickly. The third fall was where things culminated for what these teams can truly do. It was a quick story where the athletic dramatic faces tried to outsmart and outwork the equally paced cheap heel strikers. Memorable near-fall where Revival did a forearm strike/German Suplex combo and Ciampa stopped the count. After that began an awesome sequence where the belts were brought in by the heels. Gargano kicked the belt into Dawson’s face but damaged his knee at the same time, which led to the same submission where he tapped out in Brooklyn. After a few nail-biter minutes, Gargano worked his way to the ropes in full agony. We got the near-fall for the ages when Revival tried to copy #DIY’s finisher and ate a Shatter Machine for their troubles. We thought that was it right there. Legit. Some more great near-fall exchanges, as we saw Dawson get caught holding the tights at the last second. Dawson savagely targeted Gargano’s leg again, but suddenly found himself locked in a submission. #DIY applied separate submissions on both Revival members, as the heels reached out to each other and held each other’s hand to prevent tapping out. Hilariously smart. After about 15 seconds of this, we got our finish when Revival simultaneously tapped out, which meant new Tag Champs. Wow. Incredible stuff. That actually might’ve topped their Brooklyn effort, which says a lot. The ultimate story of pro wrestling tag team perfection.

– The NXT Women’s Championship match between Champion Asuka and James had its work cut out after that last spectacle, but succeeded in a story of its own accord. The backstory consisted of Asuka’s unabashed dominance upon the Women’s Division and supposedly left without challengers. James was introduced for both the nostalgia factor and Asuka’s biggest challenge yet, as she boasted in-ring experience all over the globe and wrestled with the best of the best upon the former WWE Divas Division in its heyday (if that makes sense) like Stratus and Lita. An okay start with headlocks galore, before we saw James revert a little back to her “crazed” persona when she was Stratus’ lesbian stalker. No, it wasn’t to that level here, but a few creepy grins here and there were the sleekest of mind games. We saw Asuka more vulnerable than ever, as she retreated from the ring after James kicked her. Some nice additions to the mind games as they each knocked each other out of the ring and held the ropes open, only to ignore it. That was done twice. Asuka hit a rough German Suplex on the floor, which actually prompted the Referee to stop his ring count. James took several stiff kicks to the chest and begged for more, which suckered Asuka into the Muta Lock for a nice pop. Asuka got out of it and also kicked out of the Mick Kick. James got caught in the Asuka Lock, though not to its fullest extension. This gave us the quick, yet deflated finish where James tapped out. That took the fans by surprise, but that was what we expected it to be. James didn’t miss a beat and took the Champ to the limit, but no way do you end Asuka’s reign right now. The post-match angle where Asuka ignored a James handshake to hold up her belt was nicely done. We assume Asuka’s overconfidence will be a good story to tell as the new year comes in on NXT.

– The NXT Championship main event between Champion Shinsuke Nakamura and Samoa Joe had the “big match” feel, which succeeded in part due to the hellbent ferocity told in the backstory. After he lost the belt to Nakamura in Brooklyn, Joe teased a change of heart to get Nakamura to accept the rematch clause. Afterwards, he savagely attacked Nakamura and injured him indefinitely as he dropped him on his shoulders on the steel steps. This began the great era where Joe attacked various NXT talent as he attempted to force Regal’s hand to give him either an unrecovered Nakamura or hand him “his Championship.” Naturally, Nakamura returned, we had our full-out brawls and the rest was history. All of that lasted almost three months would you believe. A plus from here was also a darker side of Nakamura’s personality brought out by Joe. As far as the entrances, we got live violinists again for the Champ, as we practically had a Strong Style symphony at ringside. An intense start as they exchanged blows and took things into the crowd. Joe had the advantage early as he applied numerous submissions and a tope suicida. He teased the same spot that injured Nakamura, but the Champ fought out of it to deliver a knee strike from the top rope. The crowd got into it as they intensified their “10” chants to the Referee’s count again. Big pop for Nakamura’s German suplex. Good near-fall when Nakamura slipped out of the Muscle Buster and hit a Kinshasa. Joe countered a second attempt with the Coquina Clutch, as the Champ fought out. This time. Nakamura hit Kinshasa to the back of Joe’s head, which knocked him out of the ring. This began the turning point, as Joe hit a low blow behind the Referee’s back outside before he dropped him on the steps again. A Muscle Buster later and low and behold, Joe regained his Title. Surely, we didn’t expect that, but certainly welcome it. Best thing is that it also creates a rematch scenario that should carry NXT out of 2016 and into the new year. The two guys have good chemistry, but take some time to gel. While not necessarily on the same level of passion as their Brooklyn encounter, this was a great main event. We’re eager to see how they follow this up too. Joe’s on his A-game as the top NXT heel. It’s a good indication that one day he’ll cause destruction on the main roster.