ROH Best In The World 2016 Reaction 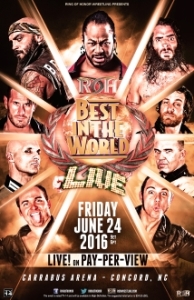 Ring Of Honor has always been great at simple storytelling when it comes to tradition.

With a main event branded as “One Year In The Making,” ROH World Champion Jay Lethal and Jay Briscoe would meet again to settle a score as Briscoe finally redeemed his rematch ever since Lethal became the first to beat him in three years and uncrown his throne.

There was also a pretty good undercard – Roderick Strong (who was knowingly leaving the company shortly) vs. Mark Briscoe in a “Battle For Respect,” as well as a ROH World Television Championship encounter between Champion Bobby Fish and Dalton Castle.

When it comes down to it, this show succeeded at giving fans a little bit of everything to whet their appetites. No standout matches, but consistent nevertheless.

– Obviously, the card’s biggest match was the World Title rematch and the opening video wasted no time on it, as we saw dramatic mirrored promos from Champion and challenger, as they called themselves “the best” and believed their words to the death.

– With Kyle O’Reilly in wait of the main event winner, we figured he’d go over in the opener against Kamaitachi, but still nice to see more of a traditional match than something fancy. With the two evenly matched in the ring, this was solely for entertainment purposes. Kevin Kelly called Kamaitachi a “sportsman” in the beginning, but those traits slipped as the bout progressed. Once he targeted O’Reilly’s knee after it buckled, he got booed. Fans were significantly on O’Reilly’s side, even as he bent the rules himself upon a submission applied whilst in the ropes. Certainly liked the “slugfest” vibe from the contest and it set up a good finish once O’Reilly hit a brain-buster and when Kamaitachi kicked out, countered it into the arm breaker. A gutsy win for O’Reilly to paint him as a World Title threat and Kamaitachi’s heel tendencies were solidified as he spit on O’Reilly’s hand and disrespected the Code of Honor.

– Not too far away from the territory claimed in the Silas Young-Castle feud, Young’s gripe with the cartoon, anime-obsessed ACH for being “childish” was buyable and the two styles contrasted enough in the ring to give us something new and worthwhile. The in-ring story was also decent, as Young kept ACH grounded with hard strikes to the mid-section and ACH battled back with aerials. Some good action down the stretch, though a little sloppy on Young’s end as not every move looked as crisp as it could’ve, but ACH winning here with the 450 Splash was fine. Doubt this feud’s over though.

– With most fans knowing this was Strong’s next-to-last night in the company, they wanted to cheer him, but he stood by his heel status while his “Battle For Respect” with Mark Briscoe went on, going as far as to shove him instead of partaking in the Code Of Honor. Since Strong had a storied rivalry with Mark’s brother Jay, it was an easy story to tell that Strong didn’t see Mark as anything other than the “second Briscoe.” This was also the chance for two ROH pioneers to set the world on fire on Pay-Per-View. The early “mind games” by Mark were unique, as he reverted back to his buzz cut as Strong ripped off what was revealed to be a wig under his bandana. The show’s most physical match to this point, but nothing extravagantly memorable outside of the “Test Of Suplex” spot. As it went on though, it became a hard-hitting stalemate as they kicked out of each other’s signature moves. It took two fisherman busters, but Mark pulled off the victory and the two shook hands and hugged, as Roddy slapped fans’ hands on the way to the back, probably a genuine moment for the company veteran.

– It was time for The Young Bucks/Bullet Club six-man train wreck match. Every one of their matches should just be called that. We won’t say they’re not fun though. We’re just confused on this newest installment of Bullet Club featuring Adam Cole. They come off as cool jerk heels, yet are looking for cheers. Anyways, the six-man tornado tag between Moose/War Machine and BC with Matt Taven on commentary followed the usual chaotic formula – superkick, “Suck It!”, superkick, high spot, superkick, repeat. Taven’s criticisms of Cole as a team player on commentary made sense given his quarrels that dated back to The Kingdom, but it appears that he has a new Kingdom brewing. BC was way over at least, so it made the bout livelier. The triple BC suicide dive spot came off well and it was nice to see even Moose take to the air several times. Hell, even Hanson screamed “Suck It!” and countered a double superkick and flipped The Young Bucks over. The finish was expected to give BC some momentum, as the trio did the Meltzer Driver and YB kissed Cole as he got the cover.

– The ROH World Tag Team Championship match between Champions The Addiction and The Motor City Machine Guns had good in-ring action, but the crowd response was tame. For some reason, it feels like this feud would have more mileage in TNA, but that’s just us. The match was also just a platform for a Kamaitachi-Jay White brawl angle, which led to the finish as Addiction took advantage and retained with a low blow from Christopher Daniels to Alex Shelley, before it was revealed that Kamaitachi was in cahoots with the Tag Champs. Guess this leads to a six-man feud between Addiction/Kamaitachi and MCMG/White.

– As weird as it sounds, the best thing in terms of quality on the show was probably the Unsanctioned Fight Without Honor between Corino and Whitmer. We hoped this was the payoff of all payoffs to close things out for good. Whitmer was now a creepy stalker, which drew Corino to revisit his “evil” madman persona. That was actually pretty cool, as he donned a beanie, white shirt, eye black and the classic blonde hair. He looked about 10 years younger and it helped sell the idea he was “back.” It was debatable if he actually lost a front tooth as Kelly exclaimed many times, but we applauded the hardcore feel. The two didn’t hold back, as they bloodied up the ring. Corino took revenge on Whitmer in ungodly fashion, with help from a beer bottle, glass shards and trusty rubbing alcohol. He had a close near-fall with the Kevin Steen classic package pilderiver, but then things got a bit lame when the lights went out and Kevin Sullivan showed up and cost Corino the bout. Surely, a good match up until that point. Useful for the novelty, but we hope to God that this feud isn’t continuing. We wanted to roll our eyes when Kelly exclaimed this could “only be the beginning.” It’s been two freaking years, guys.

– They’ve tried to establish some tension between Fish and Castle as per their in-ring “Brunch is canceled” segment, but the lack of a story as far as whether it’s two “friends” who aren’t afraid to beat one another or babyface Castle looking to overcome a more cocky heelish Fish. The dynamic was confusing and it affected the crowd response from being as loud as it could’ve been. Nevertheless, we didn’t fear these two wouldn’t deliver in the ring as it was a keen blend of high-impact maneuvers and technical wrestling. There was also a nice spot where Castle German Suplexed Fish over the barricade onto arena security. We didn’t expect Castle to win, though it would’ve been nice, but they can build to that. The finish made it look like Castle was about to pull it off when he had the Bangarang halfway executed before Fish countered it into a package pin. Fish took a hard bump on his neck, but he seemed to be okay, though he favored it after the bell.

– The Cabinet sucked as JBL’s stable in 2004 and it doesn’t fare any better as a heel stable in 2016 with The All-Night Express and “The Minister Of Information” Caprice Coleman (what does that even mean?) as they spent five minutes with a mock Presidential speech on the stage that proclaimed their mission. Rhett Titus’ rant that the company became “young kids flopping and flying around skipping leg day” was okay heel logic, but nobody seemed to care about this. Hell, even Kelly/Nigel McGuinness looked at their watches to see when it’d end.

– When you have such great chemistry like Jay Briscoe and Lethal do, even as little as 17 minutes feels sufficient enough to tell a story. Now, it was slightly below their encounter last year, but brilliantly executed from move to move. Lethal didn’t come off like his usual brash heel self in the ring, but Taeler Hendrix was on the outside to make up for that. There was a point where she cheered the crowd on as Lethal hit consecutive suicide dives on Briscoe before the roles were reversed. She was ejected upon an attack on Briscoe to try to get the DQ, but it continued on thankfully. The action carried on, but never quite got to the next level outside of a well-done Jay Driller near-fall, which led shortly to a Lethal injection that ended it. Great sportsmanship displayed to end the show as both guys respected each other in the ring as the crowd chanted, “Both these guys!”