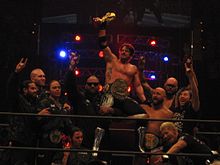 The wrestling world had been abuzz with rumors since the year started that “The Phenomenal One” AJ Styles had signed with WWE, moments like these reminding us how wonderful this industry could be.

Rumors turned to reality this past Sunday when Styles debuted in the Royal Rumble match, his first WWE step met with a crowd ovation that nearly tore the roof off. As the third entrant, he rushed the ring with a swagger that showed everyone he belonged, lasting 28 minutes until an unceremonious elimination by Kevin Owens.

Contract details leaked the following day, most fans excited to see that his main roster debut was the start of a multi-year deal featuring him on said main roster.

The news got better on Raw when we found out Styles would battle against Chris Jericho in his singles debut. Putting a true ring professional in a position to showcase Styles’ veteran skills was the right move by WWE.

Each man made the other look great, Jericho displaying his always great in-ring skills, while Styles was able to hit some of his signature spots, treating fans to a dream bout that proved to be an absolute treat.

The question on everyone’s mind though is where does Styles go from here?

Having such a high-profile 15-year veteran who makes too much money to be on NXT makes us think there’d be only one option – thrust him into the WWE World Heavyweight Championship picture.

Everyone knows Styles could hold his own against much bigger opponents. He has been doing it for years. An injection of some new talent into a Title chase that has started to feel stale due to the same old faces being pushed could begin a creative turnaround for the company.

The best place for Styles to shine right now is the hunt for the Intercontinental Championship. The fact alone that it’d set up a feud with the likes of Champion Dean Ambrose and Kevin Owens is reason enough. Styles’ character carries an element of deep love and respect for the business that has brought him fame and who better to hold the Title that embodies hard work, breeding a lineage that includes multiple WWE Hall of Famers? Styles could easily be in the list amongst these names.

The aspect of his arrival that’s most exciting are the wide array of possible dream matches that we could now witness. Put Styles in the ring against guys like Bray Wyatt, Alberto Del Rio, Dolph Ziggler, Neville and WWE United States Champion Kalisto and you’re guaranteed a classic that would feature various styles depending on his opponent.

Hell, even guys on the shelf like John Cena, Daniel Bryan and Seth Rollins could main event any show with Styles. The possibilities are endless.

There are also two other options that WWE should consider, first being the King Of The Ring (gives Styles an instant WWE accolade) or even the Money In The Bank.

As with anything, time will tell what’s in store for Styles. There’s a fading possibility this won’t work, since many have emerged from the indies before to falter amongst the high hopes and expectations of fans and Vince McMahon himself, ending in a bitter outcome for everyone involved.

However, this can easily be avoided. Creative will have to realize the caliber of talent they now possess and that Styles isn’t anyone regular. Treat him like the veteran he is, give him some success and allow him to have some say in his character and the results can go far. We’ve seen a taste of it already with the Rumble match and against Jericho.

Fans must be patient and not expect too much, too soon. Let WWE and Styles develop his character naturally into something special and don’t jump the gun simply because internet fans want him in the WrestleMania main event.

The fact that we’re even talking about this proves this is an amazing time to be a WWE fan. With countless independent stars flocking to sign with WWE (perhaps coinciding with the careful and brilliant development of NXT into a brand), everyone will reap the benefits and keep eyes glued onto the TV.

We’ll see in the next couple of years if Styles can be the veteran that emerges from elsewhere and carries that flame into WWE, even late in his career.

Give it some time – this man’s ready to fly.