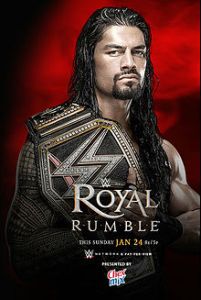 WWE World Heavyweight Champion Roman Reigns has been most synonymous with the Royal Rumble event for the last three years, whether you love or hate him.

His first appearance in 2014 had him break the record for eliminations in a single match as a heel, with people actually cheering for him to win over the rejected babyface Batista, coming up short as the last man eliminated.

Last year, he was the rejected babyface and won, thrown into a main event picture many fans felt he wasn’t ready for, forcing his character to develop inorganically.

This year, the Rumble match puts the focus solely on Reigns, since he comes in as the defending World Champion and has the belt on the line in the actual match where he’d also be the first entrant. Consider the odds stacked.

– The Pre-Show Fatal Four-Way Royal Rumble Qualifying Match between The Ascension, Mark Henry/Jack Swagger, Darren Young/Damien Sandow and The Dudley Boyz was relevant to the show and featured glimpses of a lively crowd that couldn’t get enough of Sandow. It was also surprising the fact was brought up that D-Von had never been in a Rumble before. Henry and Swagger ended up winning which felt underwhelming compared to the Dudleys or even Sandow.

– The opening video showcased the “One Versus All” theme as Reigns had to fend off against guys like Brock Lesnar, Chris Jericho and others.

– The Last Man Standing match for the WWE Intercontinental Championship between Champion Dean Ambrose and Kevin Owens got the show off to a hot start with an early Match Of The Year candidate featuring two guys well-renowned for working this kind of style in the indies and bringing a taste of that to WWE. Wise choice for an opener, as this was one of the more anticipated bouts going in. What didn’t this match have? There were harsh chair shots, loud kendo stick slaps and even a barricade cannonball thrown in there. Incredible spots all throughout this 20-minute match and we had the perfect ending with Owens getting thrown off the top rope onto two stacked tables below, keeping him down for the 10-count and Ambrose retaining. We also got a kick out of Michael Cole getting knocked over by Owens and then being used to help Owens to his feet.

– It seemed as if the crowd was all for WWE World Tag Team Champions, The New Day and anything related to their antics. Francesca The Trombone II made her debut to much relief worldwide and while The Usos gave us a good battle in the ring, the crowd never bought into them and actually booed them at points on offense. Things were very good down the stretch and that finish was hot, as Big E caught Jey Uso in mid-Splash flight and hit the Big Ending for the biggest pinfall reaction of the night.

– The Wyatt Family fog promo put themselves over as various dark-spirited things and the ones that slaughtered the chosen and would do so one by one. Fun stuffs.

– The WWE United States Championship match between Champion Alberto Del Rio and Kalisto was probably their weakest match of the bunch with some mistimed spots and botched opportunities, but the result was the better way to go, even if this Title has switched hands for the third time in two weeks.

– The Stephanie McMahon-Paul Heyman backstage segment was also uneventful, despite giving us more of that awesome tension only these two can pull off while in the same room.

– The WWE Divas Championship match between Champion Charlotte and Becky Lynch was another solid bout between the two with the crowd rooting for Lynch and Ric again helping Charlotte win in the end. The big news came in the post-match angle where Sasha Banks came out, first attacking Lynch before teasing a BFFs reunion with Charlotte before attacking her too. Banks was all on her own here and without any Team BAD affiliation and it paid off. Guess maybe we get a three-way match now for the Divas Title?

– The 2016 Rumble match ended as predictably as possible, but that’s not to say it didn’t fall victim to bad booking decisions or early eliminations that took the crowd out of the match like last year. Needless to say, the moment of the night by far was AJ Styles coming out as the third entrant, embraced on commentary as “The Phenomenal One” and already had “Styles Clash” name-dropped by Cole, which is always eerie to hear. Best part of it all was that Styles got to put in a respectable 28-minute performance before ultimately being eliminated by Owens, who was a smart choice to be the guy to eliminate him, since he could easily deflect the “aw, you eliminated him” crowd heat. Another match highlight was Sami Zayn being an entrant and right away going for Owens as they traded punches, even getting to eliminate Owens from the match. This planted the seed for a possible main roster feud. Other feud seeds were planted in the way of Brock Lesnar-Wyatts and possibly Chris Jericho (who lasted 50 minutes himself)-Ambrose. The main story of the match was The League Of Nations taking out Reigns in the first half, before he returned towards the end, only to get outdone by the returning Triple H, who extracted his revenge by eliminating him, guaranteeing a new Champion. The final two being Ambrose and Trips was certainly a pleasant surprise, but Trips winning wasn’t. We figured this was the road they’d go down and one can only assume we’ll get a Reigns-Trips match either at FastLane or WrestleMania. Of course, Reigns loses the Title again for the second time within a two-month span, but he couldn’t have won this match, as it would’ve been way too melodramatic.