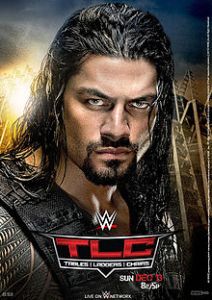 Ah, TLC… WWE’s hardcore smorgasbord of the calendar year if you don’t already count Extreme Rules in that category.

Affected by a stagnant creative direction and misguided booking decisions that made you wonder whether the company was going for laughs or their logic was “It’s so bad, it’s good,” we went into this show with incredibly low expectations, set forth by the horrendous buildup of the Raws and Smackdowns between Survivor Series and now.

That said, this show will be remembered for its start and finish.

Let’s get to the exciting stuff.

– Why are WWE trying to make Team BAD the female New Day? Intentionally bad comedy only works with certain characters. New Day can pull it off, but these ladies can’t. Their new thing is singing badly? We get we were in Boston, Sasha Bank’s hometown and she got a rabid reaction the last time and maybe they didn’t want that the second time, but damn… don’t do this. The pre-show match that put Banks against Becky Lynch gave us some memories of better times in NXT, but seeing it on the main roster with one-dimensional characters didn’t save the solid in-ring action. Just like we seen in recent matches, the story was Naomi/Tamina emphasizing the numbers game allowing Banks to win. Where is it all going? Lynch losing again continues to give us the impression she’s an afterthought despite being the one true diva main roster babyface. It’d be cool if she regained the wee little bit of edge she had in NXT just before her face turn when she teamed with Banks.

– We suppose the opening video was supposed to be a metaphorical representation of “the corporate system” holding down Roman Reigns, with a goofy graphic of the angry Samoan “replaying in his head” Seth Rollins cashing in at WrestleMania, Triple H offering his hand to the dark side and WWE World Heavyweight Champion Sheamus making lame jokes about the length of his predecessor’s reign at 5:15. It didn’t put over the dangers of the matches we’d see, but focused instead on Reigns and his struggles. Meh. Could’ve gone further with that in a cooler fashion.

– The opening WWE Tag Team Championship Triple-Threat Ladder match between the Champions Big E/Kofi Kingston, The Usos and The Lucha Dragons without a doubt stole the show, like it had potential to do. The question was how far they’d be willing to go given how most of the competitors were regarded as high-flyers and the answers were evident. Let’s start with New Day’s opening promo that delivered laughs with its content surrounding cheap hometown heat, booty, poking fun at their opponents’ names and sizes before posing for a Wheaties box that actually became an internet thing. New Day was “on” here and was a solid set-up for Xavier Woods to join the commentary booth, where he gave us some gut-busting lines about forming a ska band with the other members and even left the table to play the trombone. There were countless inventive spots with the ladders, though the biggest that comes to mind was Kalisto’s jaw-dropping Celia del Sol performed off one ladder and through another below. That was perhaps the best spot of the year. In the final minutes, Woods continued to use laughs to his advantage, throwing the trombone to knock someone off a ladder and that helped his teammates retain. An awesome match to start off and certainly warrants checking out if you do watch the show.

– We know that Ryback and Rusev can put on some good matches as evidenced by past Smackdowns, but the bad storyline hindered this bout. Lana/Rusev were now lovebirds and suddenly Lana became the girl who cries “ow,” which is apparently her new thing. The good side of it is that it’s making Rusev win again and anything that gets us back to the solid act we had this time last year with those two we’ll gladly welcome with open arms. For a third consecutive match though, Lana duped Ryback into believing he injured her on accident. You can only go to this well so many times before it gets poisoned.

– The Reigns-Dean Ambrose backstage segment set the tone for what’d go down towards the end of the show with Reigns hellbent on “making a statement” in terms of winning back his Championship, while Ambrose looked to be in celebration mode, eager to ring in the winds of change as a new IC Champion. The question was if we’d see both guys as Champions by night’s end.

– We guess Zeb Colter rolled his Wal-Mart Scooter-Mobile 4000 into the sunset since WWE United States Champion Alberto Del Rio turned on him this past week on Raw, now making him an ally to Jack Swagger, who sealed it by dedicating the match to his former mentor. Del Rio was now your friendly generic foreign heel, which was fine we guess, since that’s the role he always seems to play. The chairs match for the US Title was enbtetianing in terms of stipulation implementation, as some of those chair shots appeared to hurt like hell. Sure, a lot of the spots involved chairs simply being thrown onto the other guy, but the marks on Swagger’s back shortly before the finish where Del Rio ended it with his new finisher on a pile of chairs sold it all for us. We’re guessing this feud isn’t done yet. Just a hunch.

– The Dudley Boyz/Tommy Dreamer/Rhyno backstage segment put over the Eight-Man Tag Team Elimination Tables match with The Wyatt Family that followed it, since the Team Extreme members put over the heels for doing to them what hadn’t been done before. For some reason, commentary made it a point to focus on the ECW Originals’ age more than anything else, but the match was entertaining with some respectable table spots and a memorable use of a cheese grater, but the fun ended before a lit match could drop on a table doused with gasoline. It’s the PG era, folks. So much for that tease and that only made the sudden finish even more disappointing. At the least, The Wyatts finally had a moment to shine on Pay-Per-View.

– The WWE Intercontinental Championship match between Kevin Owens and Dean Ambrose started with an Owens promo that insulted the Boston crowd for wanting to take credit for sports teams’ success and translated it to Ambrose doing the same thing in WWE. The match was good, especially towards the end with some believable near-falls. Owens losing was surprising, but it ensures a rematch in the future and Ambrose could do excellent things as IC Champion at the moment. It’s like a reward for his popularity after all this time, so it’s nice to see something good come out of it finally.

– The WWE Divas Championship match between Paige and Charlotte was alright while it lasted with the crowd behind Paige, which worked for the finish, where Ric Flair deliberately untied the second turnbuckle and even physically lifted Charlotte’s foot onto the rope upon the pin. Charlotte took the rest of the turnbuckle off and pushed Paige into it to get the cheap win. Hopefully, we move on to another opponent for her because everybody is a heel these days. At least it’s clear the Flairs are brash heels, warranting boos. The segment that followed involving Charlotte, Flair and Lynch sold Lynch’s reluctance to join her former bestie to celebrate a cheap win while the Champ saw it as “getting the job done.” Their ideological differences will hopefully lead to this next feud, where it’ll be easier for fans to root against Charlotte.

– The WWE World Heavyweight Championship Tables, Ladders and Chairs match between Sheamus and Reigns was entertaining in terms of the physical punishment both men took, with numerous spots involving tables and ladders. WWE should be lucky Sheamus didn’t get injured with some obviously nasty cuts and bruises, helping to sell the brutality, but the crowd was sort of numb to all of it at this point. Reigns took approximately six table spots and the crowd responded with actual chants for John Cena and that they missed Rollins. Just like we thought, Sheamus’ League Of Nations mates Rusev and Del Rio came to help the Champ out when it looked like Reigns would possibly grab the gold down, which had the crowd excited momentarily. Reigns got screwed yet again. Surprise, surprise. We will say the post-match angle involving Reigns digging himself into deeper and deeper trouble was intriguing and envelope-pushing as far as speculation of how The Authority would respond. We mean, Reigns only attacked the Champion and his friends relentlessly with chairs, Superman Punched Triple H, hit him with a chair, powerbombed him on the announce table, put him through said table with a splash, Superman punched and speared him again. Are these signs of Reigns “losing it” and taking some off time or likely a rehash of The Authority abusing their power to make sure Reigns never becomes Champion again? These were reminders of when Brock Lesnar annihilated ringside and got indefinitely suspended for it. Logic would tell us Reigns gets fired or banned from the Royal Rumble. They took steps towards making Reigns a “loose cannon” which could lend its way towards a future heel turn, but we think WWE just wanted to give him some “edge,” though it makes him look like more of a jerk and not the kind of babyface fans would willingly cheer for. We’ll give it credit though. It was memorable. Believe that.