A League To Lead Us 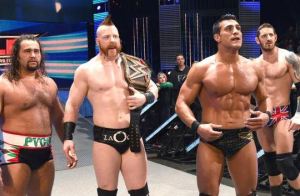 In the wake of Seth Rollins’ recent devastating injury, WWE was forced to find a solution.

They placed the WWE World Heavyweight Championship on the 2015 Money In The Bank winner, Sheamus, which was met with fans ready to riot because the Irishman hadn’t proven to be a main event player this year.

Suddenly like a Brogue Kick out of nowhere, we were given a foreign supergroup that has captivated us thus far.

In the weeks leading up to Survivor Series, we saw Sheamus join forces with Rusev and King Barrett, running through the midcard proving they could be a force. Rusev’s bicep injury temporarily put those plans on hold and it seemed like the group wouldn’t take off like it should’ve.

Once Sheamus became Champ, Rusev returned by his side and then King Barrett and WWE United States Champion Alberto Del Rio also joined. In the weeks that followed, we learned this group was called The League Of Nations. Ever since their inception, they’ve been a strong stable that can lead the brand.

Wrestling fans may groan at the idea of another heel stable, but it’s a refreshing change for four superstars who haven’t had great pasts and floundered on their own to combine their efforts and find success.

Sheamus hadn’t had much to talk about since returning to WWE after WrestleMania, achieving little aside from a throwaway feud with Dolph Ziggler that focused more on the posterior than necessary. Once he became Mr. MITB, he looked to be another failed cash-in, but since he has been Champion, he has stepped up his game and having him lead this new foreign supergroup can only benefit him further.

Del Rio had a white-hot return for the company upon Hell In A Cell, beating John Cena in seven minutes to win the United States Championship. That shouldn’t surprise anybody since the majority of Del Rio’s wrestling career has met success no matter where he is, from AAA to even Lucha Underground. In WWE particularly, he has been a Royal Rumble winner, held the MITB and enough Titles to not be overlooked for the Hall Of Fame down the road. He has the role in the group of being the “veteran” of sorts and brings legitimacy, filling in the experience gap they’d otherwise lack.

King Barrett also had a hot upbringing into the company, excelling as the NXT first season winner and as the initial leader of The Nexus that reigned supreme that summer. Since then, his career has been a case of major ups and downs, ranging from numerous Title reigns to jobbing to Ezekiel Jackson and suffering unfortunate injuries. Even though he won King Of The Ring earlier this year, it felt like another joke, until LON has come around. He finally has the chance to show WWE officials he can be main event material.

Rusev stands as the group’s young wildcard factor, showcasing impressive skills in his initial rise, as he boasted an undefeated streak and a fierce mouthpiece in the form of Lana. This crushing machine was already involved in major storylines and even got to work with Cena at this year’s WrestleMania, but fell to the wayside not long after, floundering in meaningless comedy feuds and angles with Dolph Ziggler, Lana and Summer Rae. The LON allows the 29 year-old to return to his dominant roots and put his career back on track. As LON’s youngest member, he brings longevity.

Let’s not forget who benefits most from a heel stable: the good guys.

Roman Reigns will be first on the list, since he know can show the fans his toughness on his mission to winning back the WWE World Heavyweight Championship. Having LON dominate also sets up a storyline for the returning Cena, who’s due back within the new year and can join Reigns in the fight and get his US Title rematch against Del Rio. Other top midcard faces like Neville, Titus O’Neil, Dolph Ziggler or Cesaro (upon a return) can also step up to LON and benefit long-term.

Let us also consider the possibility this stable flops. In the past, many groups and angles that look good on paper don’t have what it takes to translate to real life and it’s going to take a combined effort from talent and Creative to keep it fresh, with so many stars currently out.

This past week, the internet came abuzz with rumors of WWE Intercontinental Champion Kevin Owens joining the LON as a “Canadian Representative.” If it does go down, I believe it’ll be at TLC, in a move that’ll no doubt be a smart one for the group, adding instant credibility and more legitimacy.

Untimely injuries leave us an interesting road to WrestleMania, but rest assured, these international stars will do a fine job in the driver’s seat now that they’re given the chance.