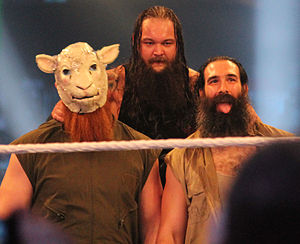 I remember at age six when the dark, creepy, rat-befriending Mankind debuted in 1996 that he was “scary.”

WWE always has a knack for supplying terrifying characters to haunt our dreams, young or old.

These days, we’re seeing both the most ultimate and unique performers to scare the WWE Universe, with one group coming quickly to mind.

In spring 2013, we were introduced to The Wyatt Family, led by “The Eater of Worlds” Bray Wyatt and his “followers” – Luke Harper and Erick Rowan. The group quickly ran through the main roster, destroying the likes of Kane, Justin Gabriel, R­-Truth, and 3MB, setting the world ablaze.

Over the next year, this backwoods cult would feud with big stars on both Raw and Smackdown, also headlining many Pay-Per-Views. During this time, they were unsuccessful in obtaining any WWE Championships, which was harder to understand than Bray’s cryptic messages.

Suddenly, Bray set “The Prodigal Son” Harper and “White Sheep” Rowan free to their own destinies. While neither man gained any solo momentum, their former leader didn’t stand out either, mainly cutting intense Titantron promos despite feuding with several big names like Chris Jericho, John Cena and Dean Ambrose.

Realizing this by 2015, it didn’t take long before Harper and Rowan reunited, forming a tag team that looked to control the tag team division. Unfortunately, an injury sidelined Rowan for four-to-six months, to which then we saw Harper once again follow Wyatt.

All hands were on deck when Sister Abigail’s “Black Sheep” Braun Strowman debuted on the Raw after SummerSlam. The tall, bearded powerhouse allowed The Wyatt Family as three to again leave a path of destruction. Three became four when Rowan returned towards the end of Bray’s feud with Roman Reigns.

The full group made more impacts, recently abducting The Undertaker and Kane on consecutive nights, executing what appeared to be a premeditated maniacal plan.

As we close out the year, it looks like things are looking down for the rest of the roster as Bray and his “Monsters” control the fate of anyone who steps in their way. The real question: what happens in the long run?

If I was running things, I’d allow Wyatt one more “put a guy over” feud with Sting for a WrestleMania showdown that writes itself and allows the Stinger to ride off into the sunset. After this however, Bray deserves to be thrust into the WWE World Heavyweight Championship picture to win that coveted belt. Just think: a darker, sinister Champion brings a much-needed change to the Title picture.

Strowman should be at his leader’s side at all times, providing an unclimbable wall for any challengers that may attempt to take down Wyatt.

As for Harper and Rowan, they should be heavily involved in the tag team picture, casting a dark cloud over the division. Maybe they even finally obtain the Titles that’ve eluded them for so long.

Having a group of evil men dominate the product isn’t a bad thing when done properly. Striking fear into the main roster while holding some gold can produce many feuds that’ll keep fans begging for more. My only worry is that while Bray continues to absorb souls, he’ll lose the interest of WWE fans – not because of himself, but because WWE continues to have no idea what to do with this enigma.

With the wrestling business in his bloodline, a group of devoted followers and one of the most extraordinary personalities we’ve ever seen, there’s nothing stopping a WWE Wyatt Family takeover.

Sister Abigail has indeed sent an unstoppable force to destroy everything that we hold near and dear to our hearts. I’ll blindly “follow the buzzards” into a desolate wasteland and watch in awe as The Wyatt Family spread hate and fear, because as we already know right now – he’s got the whole world in his hands.