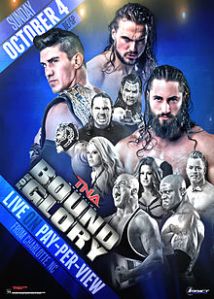 It’s a safe assumption that TNA hasn’t had the brightest year, with the nearing end of their national television deal, loss of numerous talents because of their impending financial struggles and the list goes on.

That said, the last few weeks of TNA television have showed great potential for storylines, with the exception of the whole Global Force Wrestling invasion, which essentially was presented as “Jeff Jarrett and his band of goons take over,” which didn’t give us much of anything, but helped shape the main event as we see it now.

It’s a bit baffling that Jeff Hardy, a guy who’s arguably the most popular on the roster and was already involved in storylines with TNA World Heavyweight Champion Ethan Carter III for a few months, even with his brother also entangled, wasn’t the guy to get a Title shot on the biggest night of the year.

Instead, that honor went to upstart Drew Galloway (the former Drew McIntyre) and Matt Hardy, where Jeff will serve as special guest referee. We’ll be honest, it’s an okay main event, but if the plan is for Jeff to eventually become Champion anyway and both Matt and Galloway have already received (and lost) against EC3, what’s the point of holding off on it?

Yes, we know Jeff Hardy can’t come to the United Kingdom and TNA has a bigger audience overseas, but it only seems like the right way to go here, for a company that honestly needs the momentum. With both Hardys strongly rumored to join WWE by 2016, this could be the moment TNA regrets not booking Jeff in the match directly to win it.

All things considered, the card for BFG isn’t a bad one, but we can see where overbooking can mess it all up. If TNA just gives us straight out quality wrestling with distractions as minimal as possible, we can be talking about a show that actually gives the company some positive buzz.

– X-Division Championship – Ultimate X Match – Tigre Uno (Champion) vs. TBA vs. TBA vs. TBA: We can expect TNA to shell out the X-Division match first, since high-flying spots make people happy and whatnot. There has been no dispute that the company has backed Tigre for some time as Champ, devoting whole video packages to him “speaking out against Donald Trump” and he has won all his Title defenses thus far. This isn’t a knock on Tigre, but he doesn’t have anything unique about him that makes him stand out from any other luchador out there. TNA has done a good job to establish him as a dominant Champ, but it has yet to be seen just what Tigre can do for the Division going forward, since it is more or less an afterthought. We’re guessing TNA will pull out some surprise appearances for this match, but given how Tigre has been lately, we’ll safely place our bets on him retaining.

– TNA World Tag Team Championships – The Wolves (Champions) vs. Brian Myers/Trevor Lee: Since GFW lost their “winner take all” match, they’ve been off TV, with the exception of Trevor Lee, who was given a win in an X-Division match against Tommaso Ciampa and DJ Z. We got a brief explanation from Josh Matthews that Brian Myers (the former Curt Hawkins and Pro Wrestling Syndicate standout) along with Lee were invoking their rematch clause since losing the Tag Titles when The Wolves won them back. The match should be all well and good, but the only characters we can invest in are The Wolves. What do we really know about the Myers/Lee team? Why should we take them seriously? If you’ve followed our PWS coverage, you know full well that Myers is a heel chock-full of personality. The TNA version of him has all of that stripped down. They call him “Prince of Queens” but don’t bother to explain why. That said, expect Wolves to retain. As for who’ll challenge them next, your guess is as good as ours.

– TNA Knockouts Championship – Gail Kim (Champion) vs. Awesome Kong: Now we know what you’re thinking. This match stands out the most on the card to any TNA faithful. After all, what can go wrong with these two in the ring, thinking back to their in-ring classics that put the Knockouts Division on the map back in 2007-2008 to the point where the Knockouts were almost about to get their television show with a full roster of various personalities? The Knockouts have greatly diminished since then and became an afterthought, up until most recently, when there has been a rejuvenation of sorts. We’ve got super-athlete Brooke, the creepy Dollhouse, beastly Kong, darker Kim, the reunited Beautiful People and we can only hope it grows from there. The Knockouts are actually presented as real athletes, not women with catty personalities who can’t get along and constantly call themselves “revolution starters” (sound familiar?) and that’s a breath of fresh air these days. The fact that they’re going Kim-Kong at BFG tells us they want to bring the Knockouts back to their former glory days and there’s a good chance of that here. Give these ladies 15-20 minutes and see what happens. We could be talking about match of the night honestly. With Kim just winning the Belt, we see no reason to take it off her just yet, but expect some fun here if they keep it to just these two in the ring with no outside distractions.

– Bound For Gold Gauntlet Match – Winner Receives Future TNA World Heavyweight Championship Match – Abyss vs. Aiden O’Shea vs. Chris Melendez vs. Eli Drake vs. Jessie Godderz vs. Mahabali Shera vs. Mr. Anderson vs. Robbie E vs. Tyrus: Nothing says “throwaway gauntlet” like this one, right? Oh but there’s a World Title shot incentive to make it just a little bit more exciting. With EC3 as Champion, it only makes sense for an experienced babyface to win this. The contenders here are either heels (Drake, Godderz, Tyrus) or faces just not established enough for a World Title shot (Melendez, Shera, Robbie E) and one guy we’ve never even heard of before (O’Shea) and so this leaves one guy: Mr. Anderson. If it’s not Anderson, it might be Melendez for the sake of a Title match on Destination America. We’ll still bet on Anderson since he’s the most established guy and already has history with EC3.

– Kurt Angle vs. Eric Young: These two have tangled webs aplenty this year, with the twist being that Young is more darker and demented, eager for his shot at glory, while Angle is the American hero. We’ve seen Young take out many with the Pilderiver, even Angle himself at one point. EY doesn’t seem to have any momentum and they’ve done everything possible with his heel character. The only intrigue here is Angle’s long-awaited return, but even then, he won’t be with the company too much longer, so this all feels like a waste of time. That said, this should be a fun match if given the right amount of time. Expect Angle to make the most of his return with a fresh win here.

– TNA King Of The Mountain Championship – Bobby Roode (Champion) vs. Bobby Lashley: So what do you do with a Title that has changed hands three times since June 15? Defend it of course. It went from Jarrett to PJ Black to Roode in a short amount of time and we’ve yet to hear just what exactly the KOTM Title is or what kind of power it holds. It has been treated as a throwaway prop with no meaning to it. At least TNA tried to establish something good with it when they gave it to Roode, who is now a face again apparently. Lashley came out to answer “the open challenge” and here we are. We get to see the two guys who main evented the first Impact of the year for the World Title now fighting for a toy belt seemingly. That aside, this should have the chance to also steal the show if all goes right. These two have good chemistry in and out of the ring. We’re not sure what road lies ahead for both men coming out of this, but we see Roode winning to retain the toy belt. The belt needs to be established as… something at least.

– TNA World Heavyweight Championship – Jeff Hardy As Special Guest Referee – Three-Way Dance – Ethan Carter III (Champion) vs. Drew Galloway vs. Matt Hardy: Leading the charge of the recent TNA storylines has been top heel EC3’s Title reign. When Jeff Hardy was injured and gone, it made sense for EC3 to get his chance at the top as a cowardly yet fighting Champion. Jeff’s return saw an immediate catapult to the Title picture, entering the feud with his brother Matt and EC3. TNA has done everything possible to establish Matt as a main eventer, but it just doesn’t feel realistic to see him as a World Champion. Jeff has been there before and is more popular than his brother. Why TNA decided to put Matt in the match and not Jeff is confusing, especially when you had Jeff acting as EC3’s own personal assistant before that essentially blew up when Hardy quit/got fired. Sure, Jeff gets to be Special Guest Referee in “Hardy Town” and has the chance to screw his old boss over, but why would he do that when he’s a good guy and wouldn’t want to devalue the Championship? It’s a tricky spot. Galloway being put in this match is a nice recognition of his hard work and it appears TNA wants to build him strong for the future, but his over-the-top “I love professional wrestling” gimmick needs to be toned down before any serious push with him can happen. We have a slight suspicion it has been done on purpose to foreshadow an impending heel turn where perhaps Galloway helps EC3 retain by forcing Jeff to count to three and willfully becomes EC3’s new assistant, but then it ruins everything the company has built Galloway up for thus far. Also, Tyrus is already EC3’s sidekick. He doesn’t need another. The only logical way this can end is with EC3 winning, since we only see him losing the Title to somebody like Jeff. Whatever the company has to do to get us there, we don’t care, we just ask they make it logical and maybe a little shocking. It’s the company’s biggest night of the year and with the debacle that was Slammiversary, the company needs to shake things up big time one way or another. Don’t change Ec3 as Champion just yet, but change his contenders.