WWE In Your House 3 Reaction 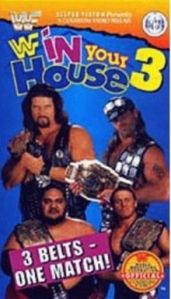 In Your House 3 was mostly known for its unique “Tripleheader” main event, which was the WWE Tag Team Champions Owen Hart/Yokozuna fighting against WWE World Champion Diesel/WWE Intercontinental Champion Shawn Michaels, with every Title up for grabs, as whoever got pinned would lose their respective belt(s) to the person who pinned them.

The rest of the event was well… very 90’s. We saw glimpses of future failures (Savio Vega’s initial babyface run, Dean Douglas, the list goes on) and we also saw some breakthrough performances from the likes of The British Bulldog, Bam Bam Bigelow and Bret Hart.

– The opening video highlighted the “Tripleheader” main event, followed by a quite soulful rendition of the “In Your House” theme song to a generic montage.

– The Savio Vega-Waylon Mercy match was only possible in 1995. Vega was way too patriotic to buy into and we’re not sure what the whole Mercy character was going for. His pre-taped promo came off like a wannabe Michael Bolton music video as he sang his words. Really. That said, the current Bray Wyatt character is apparently a nod to the original Mercy, whose Hawaiian shirt-khaki pants ring attire was unique for its time. At the time, Mercy rode an undefeated streak, while we were amazed at the amount of 90’s in this match. Dok Hendrix (the one and only) broke in with news that Owen Hart wasn’t in the building. Oh no. It was during matches like this that you could see that Vega just didn’t connect with the crowd on a white-meat baby face level. The finish saw Vega defeat Mercy with a spinning heel kick, ending Mercy’s streak.

– Backstage, we saw Jim Cornette tell Gorilla Monsoon that Owen was there, even though Monsoon disagreed and confirmed the Tripleheader match would happen either way. Should’ve been the first sign of a “bait and switch” on the main event.

– The Sycho Sid-Henry Godwinn match saw highlights of Sid acting crazy backstage while Godwinn hit Dibiase with slop. Randy Orton’s viper character seemed to draw some parallels to the Sid character, at least in terms of the look. Watch Sid’s entrance here and tell us we’re wrong. Did we really need the close-up of the slop bucket? Hope nobody was eating dinner while watching this match. The match was terrible and only got interesting towards the end when Dibiase got physically involved, eventually distracting Godwinn enough to get defeated by Sid’s God-awful powerbomb. The post-match angle saw Bam Bam Bigelow make the save and lead to Dibiase getting covered in slop by Godwinn again.

– Backstage, Monsoon confirmed that the Tripleheader match would happen, since Yokozuna would single-handedly defend both belts or find another partner for one night only who he’d sanction. Theme of the night began to be “Who’d Cornette find?” which was a decent story to keep fans engaged through the show.

– The British Bulldog-Bam Bam Bigelow match was pretty standard in terms of its start. Things broke backstage to show Cornette talking to Sid. Oh god, why? The match got better as it went along, as you saw Bam Bam’s underdog spirit coming through with his amazing agility for a “big guy” at the time. The powerslam finish seemed weak in retrospect but it built up Bulldog for Undertaker on Raw and what turned out to be a later shot at the WWE Championship.

– Bob Backlund’s promo was meant to insult the fans and introduce the infamous Dean Douglas. Oh gosh. We knew this one ended well. Douglas’ promo basically admired Backlund and put himself over as a smart teacher or whatever the hell his gimmick was. Introducing Douglas’ opponent, Razor Ramon… Wonder who’ll win this one. Backstage, we saw Mabel approached by Cornette/Yokozuna as McMahon was amazed, especially when both guys were on opposite ends the previous Raw. The match just seemed like an excuse for Lawler to make corny school jokes. This match went way longer than we would’ve thought. The finish was overbooked, as we saw 1-2-3 Kid count to three on a Razor pin with the referee out cold when he ended up getting pushed out of the ring by Razor to avoid a DQ, only to get pinned by Douglas. That roll-up pin by Douglas was terrible though. Post-match saw Kid and Razor get in a near-brawl. Why would Kid come down to count the pin though? Sigh. Made no sense.

– Sure the HBK Glasses/Hats sold well… Anyways, Michaels/Diesel talked about Owen not being there as part of “a rat plan.” How keen. They’re determined fellows.

– The Jean-Pierre LaFitte-Bret Hart match was probably the “sleeper” of the card, as Hart deserved a lot of credit for churning a yawner of a feud (a pirate steals glasses from kids and Hart’s own jacket and he seeks revenge) into a memorable bout where he carried LaFitte. The beginning was a bit ugly when Hart overshot a suicide dive and flipped over onto his head when LaFitte couldn’t completely catch him, but things recovered well. Commentary was only a distraction here, as they needed to refer to LaFitte by his full name every time upon mention. Got annoying fast. The finishing stretch was exciting, though we knew Hart was going to get his revenge (like he promised in his promo before the match) and a Sharpshooter was all she wrote.

– Backstage, it was shown that Cornette found British Bulldog to be the replacement, which was officially sanctioned by Monsoon. Decent surprise, though it was irrelevant by the match’s finish.

– The Tripleheader main event tag match that saw Yokozuna/British Bulldog face Diesel/Michaels with all three belts on the line had some fun spots in it – the “sumo standoff” between Michaels/Yokozuna for one and the chemistry between the four was solid. The finish made sense but it didn’t, as Owen came down to try to surprise the faces but ended up getting powerbombed by Diesel and pinned, even though he wasn’t the legal man. Either way, HBK/Diesel became the new Champs as the decision was final. This would get rectified the next night on Raw, but ending the show on a confusing yet triumphant way felt misleading. 1995 WWE, ladies and gents.