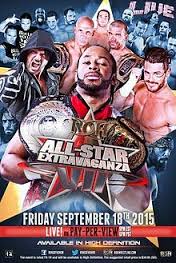 With many eyes upon the product when ROH Television Champion Jay Lethal completed his resurgence by also becoming ROH World Champion by beating Jay Briscoe at Best In The World in June, Lethal has effectively become the “go-to” guy in the company.

With two Title defenses in one night (just like WWE will do the same with Seth Rollins, the former Tyler Black of ROH fame), it was interesting to see just how things would turn out.

The members of reDRagon – Bobby Fish and Kyle O’Reilly each had separate Title shots. Fish was going for the TV Title, winning a mini-tournament to do so, while O’Reilly gunned for the World Title, referencing aplenty a time when he made Lethal tap out.

We had some other interesting bouts and stipulations on the card and we’ll get to all of the fun below.

– The opening video highlighted everybody wanting to be “all-stars,” hence the name, achieving the indisputable, tapping out the competition, mixing in sound bites from reDRagon, putting over their submission victories, to make them both sound like credible contenders to the duo Champ Lethal.

– Made sense for the first Lethal title defense to go on as the opener, as the TV Champion faced Fish. It was established by commentary early on that Fish won a mini-tournament to get here, Corino noting Fish was showing mega confidence. Also liked that Kevin Kelly ran through the laundry list of people Lethal had defeated in previous TV Title defenses since winning it in April 2014. The match took some time to get going, but the dynamic changed for the better once Lethal hit the Lethal Injection early on, as Fish rolled out of the ring on instinct. The match got better as it rolled along, going to the end, which saw Lethal use the tights on Fish when he countered Fish’s submission move. Could’ve been better, didn’t really get to anything we haven’t seen before, but not bad either.

– The Dalton Castle-Silas Young match had one of the more interesting stipulations with The Boys on the line, as well as Young needing to join them if he loses. The match itself was okay. Their previous match was better in terms of energy, but again, this was still good with excellent pacing. The contrast between Young and Castle is so evident that it’s easy to root for Castle. Young winning means he gets to take The Boys hostage and it only continues their program, since we’d now want to see Castle get revenge. Excited to see what they could turn up with that.

– The Briscoes promo was more of the usual, as far as their promos go, putting their previous undefeated streak and themselves in general over.

– The Briscoes-All Night Express match saw a welcome return for ANX, which made sense. The Decade came out as a tease for the mystery team, but just served as a buffer for BJ Whitmer to further infuriate Corino while he tried to work. Kenny King leaving TNA is no shock given he became midcard fodder after the unceremonious disbandment of the ill-fated Beat Down Clan stable, who have seen every single member leave the company. His ROH return also brings Rhett Titus back to doing something relevant. ANX provided a nostalgia factor and then we also had the Briscoe-Decade feud furthering. The match itself was quite good, as all four men rekindled their old feud flame having quite the history and ANX winning seals their momentum of return. The post-match angle which saw ANX run off Adam Page probably suggests a match at some point.

– The No Disqualification match between Moose and Cedric Alexander already had a lot of backstory on both sides with Moose bringing more aggression while Alexander was able to use the wrench thanks to the stipulation. The stipulation actually made this a fun bout, waking up the crowd with some brutal-looking spots involving chairs and a ladder. The finish was about as good as you could book since it showed Scott and Hathaway get physically involved in the match, as Scott was accidentally laid out with a dropkick and Moose speared Alexander through a table, obliterating it. It was about both men pushing each other to the limit and we also saw Hathaway showcasing the aggression Prince Nana instilled in him. Moose isn’t quite ready for the World Title picture, but he is being groomed well to be there in no time.

– The third match of the Best-Of-Five Series with Matt Sydal-ACH had the intrigue of ACH being in his hometown in a tied series. The athleticism here was top-notch as you’d expect, mixed in with subtle moments of technical prowess and momentum swings. The story now is that Sydal trails ACH down 2-1 and ACH being one win in the lead. Like all Best-Of-Five series, we’re sure there is a fifth match to happen.

– The three-way Tag Team Championships match between The Addiction, The Young Bucks and The Kingdom was strong with non-stop action in the ring. Yup. Superkicks galore. We also got some storyline developments, as the Red Masked individual turned on The Addiction, and The Kingdom shocked everybody by stealing The Young Bucks’ sure win with a blind tag. Have to feel for the much-overs Young Bucks who come so close every time only to fall flat.

– The ROH World Championship Number One Contender’s Four-Corner Survival match between Roderick Strong, Michael Elgin, AJ Styles and Adam Cole with matchmaker Nigel McGuinness on commentary was an excellent bout that was pretty much all four guys breaking each other down and keeping themselves occupied. Cole got some big pops, while the crowd wasn’t too warm to Elgin. Roddy was more in the middle. The finishing sequence was well-done and Styles being number one contender probably made it more likely for Lethal to retain since that’s already a marquee match. Since Strong just had a Title shot and headlined Death Before Dishonor and Elgin not quite ready yet, it was pretty much down to Cole and Styles for the winner anyway.

– The ROH World Championship match between Lethal and O’Reilly was a worthy main event that teased a loss for Lethal several times, and had a “turn” that saw Adam Cole kick O’Reilly down after saving him. It ended up being that Cole played O’Reilly and the fans by teasing dissension in The Kingdom just to throw everyone off, since it turned out him and The Kingdom were just fine. It was a decent way to get to what we’re sure is a feud between the former FutureShock members and then The Kingdom is truly dominant on the scene now.