WWE King Of The Ring 1993 Reaction 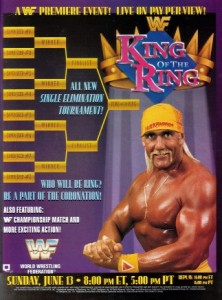 From the opening bell to the final seconds of the broadcast, this was  a night that belonged to Bret “The Hitman” Hart all the way.

Many could even argue King Of The Ring 1993 was a career night for Hart as he battled through three rough, grueling matches to get the King Of The Ring accolade, also sparking what would be a long feud with Jerry “The King” Lawler over the title.

When Hart wasn’t in the spotlight, the undercard took a bit of an upper cut to the chin, with some questionable booking decisions. We’ll get into it all below.

– Props have to be given to the broadcast team here of a young Jim Ross, Bobby “The Brain” Heenan and “Macho Man” Randy Savage. Ross was perfect at play-by-play and sold a heel attack like nobody else, while Heenan dropped some hilarious lines on commentary and Savage made the perfect middle man commentator. You could see there was a “fresh” feeling in the storylines and programming since Raw had come around for the product.

– The first round King Of The Ring matchup between Razor Ramon and Bret Hart was a very good opener that was evenly matched on both ends. This was around the time that Ramon was showered with “1-2-3!” chants from the crowd. The finish was good after a very convincing near-fall that saw Hart use Ramon’s own momentum against him. Hart was an early favorite, but nobody figured he’d have the night that he did.

– The first round King Of The Ring matchup between Mr. Hughes and Mr. Perfect had some highlights shown beforehand of Hughes being the first guy to lay out the Undertaker with his own urn. The action wasn’t anything particularly memorable despite Perfect selling like crazy for Hughes, who again used Taker’s urn to give himself the DQ. Why? We’re not quite so sure about that. Dude cost himself the match.

– Mr. Fuji and Yokozuna were always the perfect villainous duo in the early-to-mid 90’s WWE, as we saw in their backstage promo. These sort of felt like empty words from Fuji though. The “different” Yokozuna he promised that’s looking to take America down looked a lot like the same Yokozuna to us.

– The first round matchup between Bam Bam Bigelow and Hacksaw Jim Duggan was an okay match that went back and forth briefly before Bigelow eventually took over and won with his finisher. Nothing special, despite further establishing Bigelow as the monster guy.

– Couldn’t have cared any less about the eight-man tag match nor The Smoking Gunns and The Steiner Brothers. Just didn’t have that watchability factor.

– The first round matchup between Lex Luger and Tatanka already had the hype of being the first match where one of the two had to lose. Luger was quite good at playing the narcissist character and the match got better as it went on. It made sense for it to go to a draw to protect both guys. The decision also allowed Bigelow to go straight to the finals. Liked Luger’s attack on Tatanka after trying to pump the crowd up asking for five more minutes.

– Liked the tension that aired between Hart and Mr. Perfect as the night went on, going from mutual respect to almost competitive enemies. Given the family lineage of both men, it made sense to also tie it into the match and what King Of The Ring truthfully stood for.

– The Semifinals match between Hart and Perfect was the best match of the night – having both guys go all out, knowing each other’s moves. Perfect slid into a more comfortable role as a heel for the match until after the end when he offered Hart a handshake. This also set up the melodramatic finals match of Hart-Bigelow.

– Who knew that this would be the last WWE Hulk Hogan backstage promo at the time? Surely not a lot of people, but like always, he talked it up excellently and Jimmy Hart brought the point on home.

– The Yokozuna-Hogan match for the WWE World Heavyweight Championship was slightly above average, but even then, that doesn’t say a lot. A camera shooting a fireball in Hogan’s face was unique in itself, but could’ve been much better than it came across. It gave Hogan an out to lose and Yokozuna a moment to take advantage of to become new Champion.

– Mr. Perfect’s backstage promo had him react to the match against Hart and put over Hart and his own disappointment. What more could you ask for?

– Even in 1993, you could see the caliber of talent that lied in Shawn Michaels as he appeared to be the cocky athlete coming up on the rise in a cartoon world. The addition of Diesel obviously only added to his act, but this was the promo that formally introduced him to the world, inspired by Diesel gas, that’s often run by mack trucks.

– We really could’ve done without the eight-man tag match. Really.

– Sure, we can understand Fuji and Yokozuna celebrating their win backstage and wanting to brag about it all over America, but if President Jack Tunney could congratulate them, couldn’t he also see the illegal way in which they won?

– The Intercontinental Championship match between Michaels and Crush was a pretty good match – Crush provided the babyface spark while Michaels resorted to cheap tactics. Eventually, Crush got in control and that’s when they sent in that ridiculous story.

– The Bigelow promo had him hype the final match and he literally did so. Someone had to be hopped off on coffee.

– The final KOTR matchup between Bigelow and Hart was the expected main event that told the story of a fresh Bigelow against a tired Hart, right down to the finish that played a tease several times from Luna hitting Hart with a chair outside to the two reversal decisions. A lot to digest, but the match restarting looked great for Hart and his pinfall victory only sealed the deal. As far as Lawler’s coronation attack, that was actually very well-done and you knew this would be a great feud either way.

– King Of The Ring – First Round – Bret Hart def. Razor Ramon via pinfall to advance

– King Of The Ring – First Round – Lex Luger and Tatanka to a 15-minute draw; Both eliminated