WWE Money In The Bank 2015 Preview/Predictions 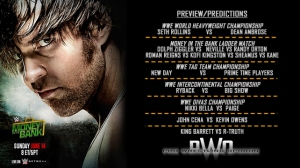 Caught in the realm of WWE’s recent hotshot Pay-Per-View/WWE Network live special schedule, Money In The Bank finds itself in decent footing.

Things could be much worse, right?

Headed into this show, Dean Ambrose-Seth Rollins are set to do battle with a ladder between them for the title that Ambrose wrongfully holds. NXT Champion Kevin Owens and United States Champion John Cena will have a rematch that comes with high expectations. Of course, the match that the show is named after should have its share of thrills but given the participants, the pathway to victory only seems to be visible for one guy.

The undercard also isn’t much to write home about, but we’ll dive into all of that below.

– R-Truth vs. King Barrett: Okay, did anybody put any thought into putting these two in a match together? This feels thrown together at the last second and sorry, Creative – we need more than Truth putting on Barrett’s robe to make us convinced there’s some genuine bad blood here. Ever since Barrett won the King Of The Ring, he has saddled further into his mid-card fodder role and that doesn’t seem to want to change for any reason. As for Truth, we’ll admit his antics as of late have been funny (See: Coming out to cut a promo on a match he’s not even in and acknowledging it) but is this a guy who is being built for anything in particular? That said, if we had to choose someone to come away with a win, we’d go with Truth since WWE wants to back his “confusion” gimmick. If you’re going to push it, at least go full throttle with it.

– WWE Intercontinental Championship – Ryback (Champion) vs. The Big Show: Since this feud came to fruition a couple weeks ago on Raw, the build hasn’t been all that, but then again, it doesn’t have to be. Ryback is a newly crowned champion and could use some solid victories to put him over. At this point in Big Show’s career, that appears to be his role as a credible main eventer to put people over (see: putting Roman Reigns over at Extreme Rules) and that’s exactly what we see happening here. Can’t help but feel like the peak of things was Ryback hitting Shellshocked on Show on Raw, but they’ve done just enough to tease more action between the two to hold off until this point. Look for Ryback to hit this big power move once again to retain his title.

– Divas Championship – Nikki Bella (Champion) vs. Paige: When you look at the recent promos in this feud, there have been countless references to Paige wanting to “change the division” and that would start with another title run. However, in the way of that has been the Queen Bee, “Fearless” Nikki Bella. The most frustrating aspect of it all is the clear lack of character continuity with the Bella Twins. They cut heel promos but then slap hands with the fans and smile when they come out to the ring. “Twin magic” was a tactic they resorted to frequently as heels and they pulled it out again to screw Paige out of a title win, which is what has spawned this rematch. Going to this “change” angle, we’d expect Paige to come out with a fighting victory, but then what happens to Nikki Bella? The Divas Championship is what is keeping her relevant, but if anyone will beat her, it should be Paige. On that note, where has Naomi been? The one jumpstart to the division as of late has been absent off TV. The sooner she comes back, the better.

– Tag Team Championships – Xavier Woods/Big E (w/Kofi Kingston) (Champions) vs. The Prime Time Players: With the unfortunate injury to Tyson Kidd that has likely sidelined him up to a year, we’ve noted half-hearted efforts by Creative to push other tag teams in the division, but it’s hard to do when the PTP are the only other faces around. That said, The New Day continue to flourish in their entertainment value as heel champions and this momentum is just too much to spoil right now. Since Kofi is in the MITB ladder match, it’s expected his other mates will defend the titles here. The PTP is in a tricky spot, since the fans seem to give them “go-away heat,” but really warm up to Titus O’Neil’s offensive maneuvers. No way is this team ready to run with gold. They should only be looked at as stepping stones to New Day’s new opponents. The scary thing is who would be left to feud with them? Given the tragic news of the death of Dusty Rhodes, how cool would it be to see a Cody Rhodes/Goldust reunion? Let’s hope WWE is saving a surprise for us there that would use all the hype for Dusty and turn it into genuine fan interest for the company.

– John Cena vs. Kevin Owens: The bulk of this feud’s success has been the momentum of Owens that only gets stronger and stronger. Just keep in mind that the guy beat Cena in his first WWE match and that has spread shockwaves through the internet and casual fans alike. They sprinkled this feud further with memorable and moving promo exchanges that advertises the battle of “Resilience vs. Overconfidence” that we’ve come to know. Now, Elimination Chamber gave us a potential Match Of The Year contender, so we can expect more of that here. What scares us is that this match is probably happening again to give Cena a victory without pinning Owens clean (via DQ), but how cool would it be if Owens were to win it again? Could we see the United States Championship put on the line in a third match? Owens actually has the right to a title shot with his victory at Elimination Chamber and it’ll be interesting to see if that gets played up. With Owens rumored to drop his title to Finn Balor on the July 4 WWE Network Live Special in Japan, it’d make sense for Owens to run with new gold to keep his main roster momentum rolling. That said, we will give Cena the slight nod here, to build to a third match with the U.S. title on the line, where Owens will be the guy to finally take the belt off him.

– Money In The Bank Contract Ladder Match – Roman Reigns vs. Kane vs. Dolph Ziggler vs. Neville vs. Kofi Kingston vs. Sheamus vs. Randy Orton: When it comes to the match that carries the show’s trademark, the lineup isn’t a disappointing one. However, it’s insanely obvious to see who will come out with the win here. Remember when Reigns was told by The Authority that he’d have to “go to the back of the line” to receive a world title shot? The briefcase ensures a definite title shot at any time. A lot of the build for this match has been building Reigns up to look resilient, while everyone else has kind of been there for show. Kane is in the match solely to make sure The Authority come out victorious, but he’s likely a body to land on for the high-flyers. Ziggler is going to bust his ass here and perhaps come closer than ever to more briefcase glory, but he’s too strapped in to an on-screen feud with Rusev to believe he will win, especially with Reigns in the equation. Neville had his big moment in the go-home Smackdown, but we think he’s there for the highlight reel and is a dark horse at best. Kingston is in that same role. Sheamus would be taken more seriously here if it wasn’t for Reigns, but he could make a cool briefcase holder. Orton has faced Rollins twice already and we highly doubt they’ll go down that road again. Reigns winning opens up a floodgate of possibilities. How ironic would it be if Reigns were to cash in on the guy who cashed in on his own opportunity at that same title? Even if Ambrose wins the title, it could be a fun moment, though unlikely.

– WWE World Heavyweight Championship – Ladder – Seth Rollins (Champion) vs. Dean Ambrose: The Ambrose-Rollins chronicles has actually bettered by the weeks by interweaving little storylines together from Rollins’ self-caused alienation by The Authority to Ambrose partying with possession of Rollins’ own title. It’s all been booked in an entertaining way and it almost feels as if Ambrose is actually champion, if that was done by design. These two guys work well with any stipulation and a ladder should be no different here. Given the fact that Brock Lesnar is supposed to return on the next episode of Raw, that really shakes up the main event picture once again and we’ll be closer than ever to the Rollins-Lesnar rematch that we never got back in March. For that to happen, Rollins needs to somehow come out on top and it’ll be interesting to see if he is truly on his own like it seems to look like. If Reigns wins MITB and Rollins retains with Lesnar returning for his rematch cause, Battleground could be a very interesting main event.