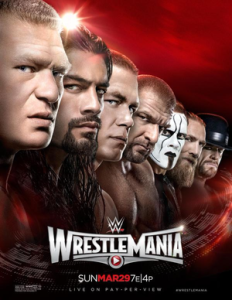 (“WM31Poster” by Source. Licensed under Fair use via Wikipedia)

Say what you want, but after the end of WrestleMania, the internet always seems to break and this year, we got yet another reason why.

Seth Rollins has pretty much had the best year anyone can have so far and now he’s topped it off big time.

Doesn’t get bigger than the main event of WrestleMania for a successful Money In The Bank briefcase cash-in.

This opens up so many possibilities. We’ll get into all of them below, but anybody can agree that this show – while lackluster in build and mild on paper except for the obvious marquee matches – delivered in almost every aspect of entertainment.

– The fatal four-way Tag Team Championship match with The Usos (w/Naomi), Los Matadores (w/El Torito), Big E and Kofi Kingston (w/Xavier Woods), and Tyson Kidd/Cesaro (w/Natalya) was predictable in the sense that Kidd/Cesaro were way over, New Day were way not, everyone appreciated The Usos when they weren’t in offense towards Kidd/Cesaro and Los Matadores were just there. The constant switch between control and utter chaos provided a nice pace to the match and set up the finish nicely as Cesaro tagged Uso as he was about to dive off the top and “stole” his pin. They retained and had their moment to shine.

– The Andre The Giant Memorial Battle Royale was the utter expected chaos. Hideo Itami had his brief moment of glory by eliminating Bo Dallas (who just seemed way too happy about being there) but then was boringly KO’d out of the ring by Big Show. Lameness galore. Mizdow finally turning on Miz was excellently done and done in a way that can easily be followed up on post-Mania Raw, but with Show standing around while it all happened, it made you question the logic. Show getting the best of Mizdow was super lame on the big stage, but it gave him bragging rights for future segments if anything, because he needed more? Granted, that shot of him doing Andre’s pose next to the trophy was one to remember.

– The Intercontinental Championship Ladder match between Daniel Bryan, Bad News Barrett, Luke Harper, Dolph Ziggler, Stardust, Dean Ambrose and R-Truth started the show off on a nice note. It was cool to see the nod of acknowledgment on Bryan’s entrance that this year’s Mania started how last year’s ended, with the Yes Movement. That’s one of those little things that people will notice if they ever watch WrestleMania in consecutive marathons. The action wasn’t too extreme, but a few cool spots involving the ladders (powerbomb out of the ring) were enough to get the crowd on their feet. Bryan was the obvious choice from the get-go and can bring the IC Title to new heights, no pun intended.

– The Randy Orton-Seth Rollins (w/J & J Security) match was a solid, though predictable match that brought just the right amount of intensity. That finish with the “possum” RKO was hot and well-executed. Most beautiful RKO ever. The near-falls down the stretch were believable too. Ultimately, Orton got his revenge and taking the end of the night into account, he technically pinned the current WWE World Heavyweight Champion. Does that put him in line for a Title shot? Raw could be interesting.

– The Sting-Triple H match was preceded by the anticipated elaborate entrances – Triple H’s Terminator-inspired particularly went over well. This match fully lived up to the hype – bringing in an aspect to the match never even considered in the hype, but cool nonetheless in the nostalgia factor with D-Generation X and nWo all coming to blows, which the crowd was hot for. It was a unique sight, especially with memories of the Monday Night Wars in the rearview mirror. Just like WWE beat WCW, Triple H beat Sting, perhaps another metaphorical representation of the war, even though the WWE was led by heels here. Regardless, the “time warp” made this quite entertaining for everybody young and old. The embrace after between Triple H and Sting in the form of a handshake was also great.

– Having Daniel Bryan be congratulated backstage by legends and former IC Title holders like Ric Flair, Ricky Steamboat, Pat Patterson, Roddy Piper and Bret Hart was an excellent rub and showed that he had the backing of everyone – fans and legends. Step one to Operation: Bring-Prestige-To-IC-Title is complete.

– The Paige/AJ Lee-Bellas Divas tag match was short and sweet, making the most of its rather short time. It had the Bellas dominate only to build up to Lee/Paige to grab the momentum and came out with the win. Not much to rave over, but nothing bad either, creatively speaking.

– The John Cena-Rusev match for The United States Championship really went all out with the entrances, especially for Rusev. The match was entertaining for the time it lasted, though it felt just a step behind their FastLane effort. The guys showed their urgency by pulling new moves out – Rusev going to the top rope for the first time and Cena doing a springboard stunner, which appeared better on instant replay – and it spoke to how bad both men wanted it. There were some strange moments – Lana throwing her shoes in the ring comes to mind – but Cena winning the belt was predictable. Lana getting knocked off the apron appeared to have been done for shock value as Cena pinned Rusev immediately after. Rusev not showing concern for Lana while she stumbled up the ramp with officials was an interesting hook for post-Mania Raw. Is there a problem on the Russian Front of the WWE Squared Circle?

– The Triple H, Stephanie McMahon, Rock and Ronda Rousey segment delivered in terms of entertainment and did just enough to get everyone talking. Rock appearing on another WrestleMania was no shock and it closed the door on his Rumble appearance and what questions that had left unanswered. Though Triple H was great in his gloating of beating Sting and Rock did his schtick well, much kudos has to go to Stephanie here. She stole this segment with her toughness and facial expressions. She truly owned her words here and the eventual physical confrontation was a nice little payoff, but it makes us wonder just what the consequences will be, if any.

– The Bray Wyatt-Undertaker match lived up to all the hype and got better as it went on. The big moments came in the emphasizing of similarities in both characters with Taker sitting up as Wyatt was in mid-crawl and the trade of finishers was great. Taker winning by the Tombstone Piledriver was a fitting end for what could be his last two-step at the Mania dance.

– The Roman Reigns-Brock Lesnar (w/Paul Heyman)-Seth Rollins match for the WWE World Heavyweight Championship was everything built up to be and more. Just when we thought we knew what would happen – WWE changes the rules completely. Rollins cashing in with the most eyes on the product on the biggest stage in the biggest match of the year and coming out the winner was perfect. With the crowd’s pro-Lesnar reaction, Reigns could definitely not win this. Even the story of Reigns-Lesnar in the ring was well done, with an inhumane total of F5’s, Spears and Superman Punches as it looked like another Lesnar domination for much of the match. Reigns took a beating and a half and yet at the end was the one pinned and even then, it didn’t feel like he lost too much, besides obviously getting “robbed.” People could argue this moment will lead to a Rollins face turn, but his very actions were quite heelish and you can see it on his smirk with the photo of him, the belt and J & J Security going around online. This does however, set the road for a proper face turn with Lesnar/Heyman, as it also created perfect anticipation for the fallout, as Lesnar would probably be angry and can contest he was never pinned while Reigns had his match and lost.